*Once again, I’m giving my opinion on products with no kickbacks whatsoever.  I really gotta get in on that Amazon Affiliate program.  But I probably won’t.

On our recent trip to England & Wales I tried out some new travel items.  I thought I’d rate them here.  As we say in the teaching world when we pass on lesson plans and ideas to our colleagues: Use or lose.

What I bought: Packing cubes

I’ll admit, I was skeptical when I heard other bloggers talk about packing cubes.  Why do I need suitcases within suitcases?  But in the days before our recent trip, while staring into the abyss that was my empty suitcase, my inner Type A Organizer became curious.  Then I remembered the near instant gratification that our Prime membership offers. I practically ran to the computer and ordered them at once. 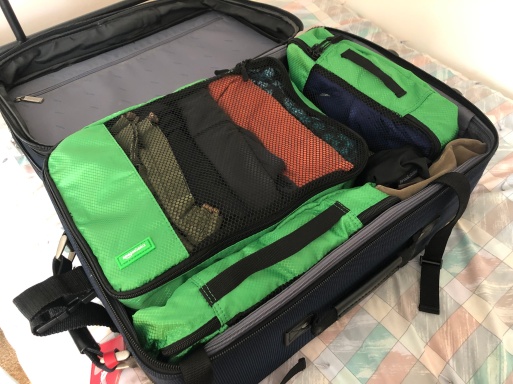 What I thought: I LOVE them!  Usually my bag starts out so neat and tidy it could pass military inspection, but within a day or two of arriving at the destination, order and discipline become lax.  By the third day it looks like the pants have gone to war with the shirts and the underwear got caught in the crossfire.  But these cubes changed everything.  I sequestered the pants, skirts, and other bottoms in one cube, and confined tops to another one.  I incarcerated the unmentionables (and socks, which co-mingle with my unmentionables) in the long, skinny cube, and sentenced shoes to solitary confinement in the remaining one.  When I wanted a shirt, I just pulled out the appropriate cube.  Same with capris, or socks, or whatever.  They also stacked with Tetris-like precision in my suitcase, but whether that was by chance or design, I’m not entirely sure.  What is certain is that I won’t ever go back to a suitcase full of unrestrained, war-mongering travel clothes.

What I bought: White Noise Machine 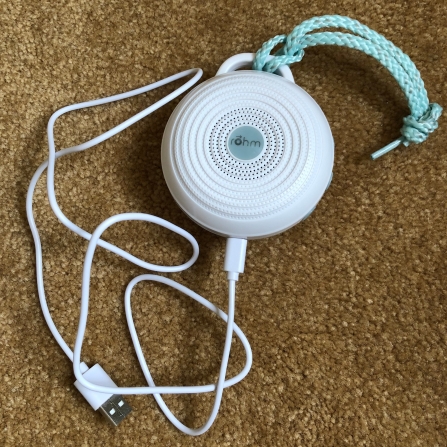 Here’s a little secret: The husband sometimes snores.  Not usually at freight train levels, but enough that if I wake up at say, 2:00 am, as is becoming the norm these days, I can’t get back to sleep.  I’m also easily fussed by the sounds of people talking, music thumping, and all the other noises that are antithetical to a good night’s sleep.  At home I combat any vexing disturbances with my cherished Sound Spa Sleep Sounds machine, but alas, it’s not portable.  Thus, a few years ago, before embarking on a Viking River Cruise with my mom, I purchased a Sharper Image white noise travel machine from an airport shop.  That was good for a while, but after a year the volume buttons conked out, and a white noise machine that refuses to get loud enough is a white noise machine you don’t want.  Ergo, I thought I’d try again, but with a different brand, and this one had good reviews.

What I thought: I like it a lot.  It’s small and convenient, and though it has just three sounds – two different pitches of white noise and one crashing wave setting – that’s all I really need.  It has several volume levels, so getting it loud enough is not a problem (unless it is one of those freight train nights, in which case elbow jabs and swift kicks may be your only options).  I also like that it’s rechargeable.  It does need to be recharged daily, however, or it’ll run out of juice in the middle of the second night.  I’ve had this for six months and have used it several times, and so far so good.  As long as the volume doesn’t crap out after a year, I’ll be happy.

What I bought: Travel Outlet Adapter

Gone are the days when a single converter plug between the two of us would suffice.  Hauled along on our most recent trip were 2 iPhones, 1 iPad, 1 white noise machine, 2 bike lights, and 2 Gamin bike computers – all in need of frequent recharging.  It was time to upgrade to a different outlet adapter.

What I thought:  Perfect!  This met the Millennial-like charging needs of a couple of Gen-Xers.  No more fighting over who got to charge their phone overnight.  What more can I say?  One less thing to argue about on vacation is always a plus.

What I bought: Travel Pillow

So here’s a little something about me you probably wouldn’t know about me.  I have to sleep with a knee pillow.  If I don’t, my lower back talks to me – and quite rudely, I might add.  At home I have a specialized one, and when I’m sleeping elsewhere, our donut-shaped travel pillow has worked well enough.

Anyway, when I decided to try a new travel pillow with a shape that wouldn’t make me crave junk food, I was curious to see not only how it rated in its traditional role as head-and-neck-supporter, but also in its night job as knee-separator.

What I thought: Pretty good!  My head stayed more upright than it does when using one of the donut-shaped pillows.  This meant the kink that permanently resides on the left side of my neck didn’t get activated, at least not until we started cycling.  The fabric is soft and the foam is decently firm.  While trying to fall asleep on the plane I was wishing that the two parts that go around the neck could snap together somehow, perhaps by a connecting piece of fabric.  My donut-shaped travel pillow snaps and I quite like that feature.  However, I woke up five or so hours later and the pillow was perfectly in place, so I guess I can live without it.  The only other con is that it can be a little challenging to fit into its bag, but again, not a deal-breaker.  And as a knee pillow?  My back had no complaints, so neither do I. 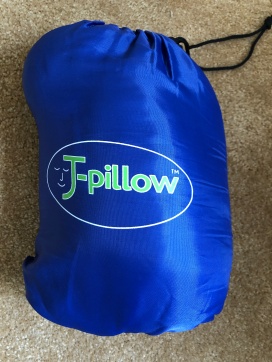 So there you have it – stuff I bought and what I thought.  Do you have any experience with these or related travel items?  Share your wisdom in the comments section below.  And let me know: Do you, too, love using packing cubes to put your riotous clothes on lock-down?