So if you’ve been following along for a little while, you know that the Wales portion of our trip started out with some  adventure.  But climbing Crib Goch up Mount Snowden wasn’t the only thing we got up to in Wales.  It wasn’t even the main thing… just the deadliest.

Rather, Wales was all about castles.  Castles, castles, castles!  But before I get to that, I’ll catch you up on my experiences with the Welsh language.  As you may recall, I made some effort to learn a little Welsh before our departure.  I won’t say I regret it, because I never regret learning the language of a country I’m visiting.  Rather, I’ll say I didn’t much need it.  I was diolch-ing and bore da-ing my way all over north Wales, but that’s about the extent of it.  The husband and I were surprised, not only by how few Welsh people spoke Welsh, but also by how many English people live and work in Wales with about as little Welsh mastery as I had managed to achieve.  The infrequency with which this ancient and melodic language is spoken made me a little sad, to be honest.

Fortunately, there are few better remedies for sadness than castles!  But please be patient a little longer, for I am, once again, getting ahead of myself.

The home base for our visit to my 17th country was Betws-y-Coed, a town within the boundaries of Snowdonia National Park.  Small and charming, it’s mainly filled with inns, restaurants, and shops catering to outdoor enthusiasts.  But that doesn’t mean that exciting things don’t happen in Betws-y-Coed.  To wit, very early on our first morning there, I heard some frantic baaa-ing.  A glance outside our bedroom window revealed one freaked-out sheep running down the street in front of our inn.

Speaking of our inn – Afon View Guest House – we were very pleased to finally have WiFi in our comfortable and darling room.  The owners were friendly and helpful and served great breakfasts, also.

The husband wanted the four-poster room. 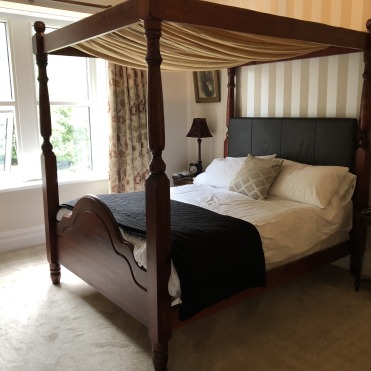 You don’t have to twist my arm!

But anyway, back to the sheep.  We soon went from sheep sighting to sheep encounter.  The husband, who had been out for a run, met the fluffy creature head-on in the street and gotten it turned around so that it was heading back in the direction from whence it came.  I ran downstairs and followed it down a side street.  At one point I thought I might be able to corral it into a nearby cemetery whose doors were flung open, but my little ovine friend was having none of it.  It deftly evaded my attempts to fence it in, and ended up running off.  I had to give up my efforts and hope that someone was able to call the emergency hotline that I’m sure exists for just this type of situation (1-800-BAA-BAAA). 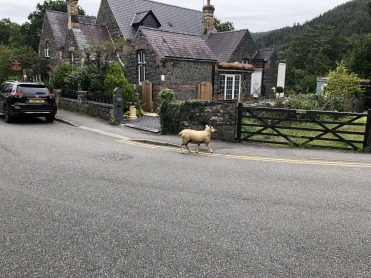 Get away from me, lady! 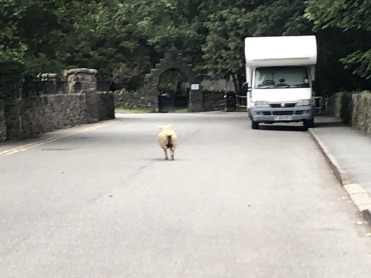 Cemetery up ahead, but it was not to be.

Another fun sheep encounter under our belts (but maybe not so fun for the sheep), we set off to see some castles.  Northern Wales is home to four UNESCO World Heritage Site castles: Conwy, Caernarfon, Beaumaris, and Harlech.  Though there are scores of castles all over Wales, these four are, per UNESCO, “the finest examples of late 13th century and early 14th century military architecture in Europe, as demonstrated through their completeness, pristine state, evidence for organized domestic space, and extraordinary repertory of their medieval architectural form.”  Take that, other Welsh castles!

These fortresses were built during the reign of Edward I (late 1200s) and were visited by all sorts of fascinating players in Plantagenet history.  However, just like it’s possible to get “cathedraled-out” in Europe (for me, this usually happens about halfway through the second cathedral), it’s also possible to get “castled-out.”  This takes much longer for a castle-lover like myself, but it can and did happen by the end of our time in Wales.  It was actually more that they all started to blur together in my mind and I couldn’t remember which castle was which.  Still, the husband very much loved the architecture, defensive features, and other building-related aspects of these historic structures, while I reveled in the history – the idea that, say, Margaret of Anjou or Edward III had walked within the very same walls.

The town of Harlech has the added bonus of being home to the world’s steepest road, having taken the honor from Dunedin, New Zealand, just a few weeks before we arrived.  This discovery made the husband doubly sad that this was a non-cycling section of the trip. 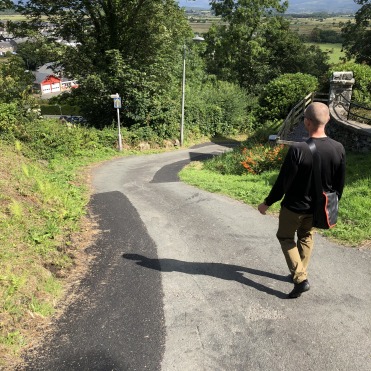 Warning: What goes down must come up.

Where, oh where is my bike when I need it?! 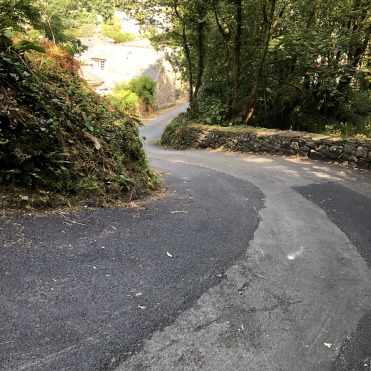 Back at our first castle – Conwy – we purchased tickets that covered all four of the aforementioned castles as well as a visit to Plas Mawr, located right in the charming town of Conwy and described as “the finest surviving Elizabethan house anywhere in Britain.” Because it’s fully furnished and decorated as it would have been in the 1500s, our visit there felt more like an immersive experience.  Further, it had another thing the castles lacked – an audio guide!  Wow, would an audio guide have made the experience of visiting those castles so much more edifying.  Frankly, we were shocked at the oversight and began hatching a scheme to create audio guides to sell to the castles’ administrative body for millions of dollars.  Unfortunately, we’re too busy.  Nor do we know how to make audio guides.  Anyway, here are some photos of Plas Mawr: 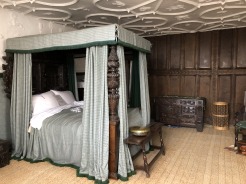 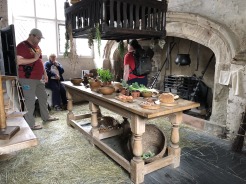 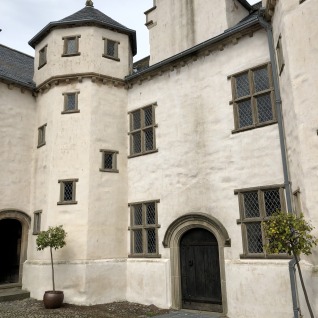 Our final must-see in northern Wales was the village of Portmeirion.  If you are familiar with the late-1960s British TV series called The Prisoner, you are familiar with Portmeirion.  It’s where the show’s eye-catching exterior scenes were shot.  If you are not familiar with The Prisoner, you still might know the stunning village as the brainchild of Sir Clough Williams-Ellis, who designed and built it over the course of 50 years.  Based on what we’ve read, his goal was to create a space that was in harmony with nature and captured the spirit of the Mediterranean, though, according to him (and I’m paraphrasing here), “Any resemblance to the Italian seaside village of Portofino – which, yes, I’ve visited many, many times – is purely coincidental.”  The thing we couldn’t get over was the fact that, though this is a dedicated, paid tourist site, people actually live in the colorful buildings of the beautiful but somewhat artificial-looking village of Portmeirion.  Not employees – just regular people.  It would be like living in Disney World.  Weird. 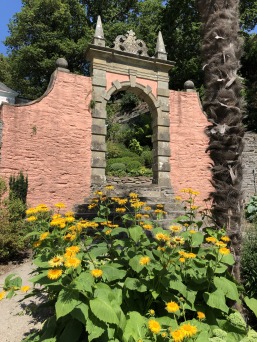 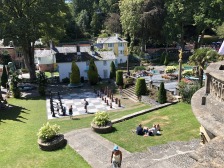 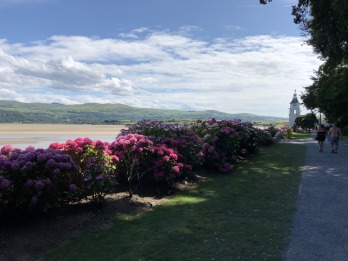 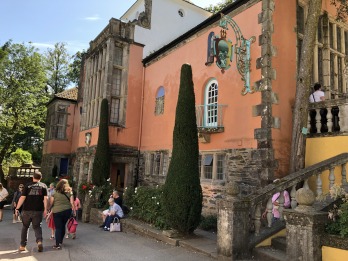 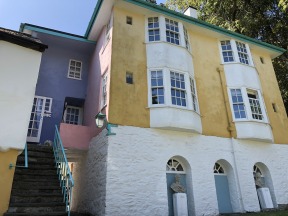 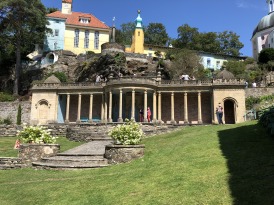 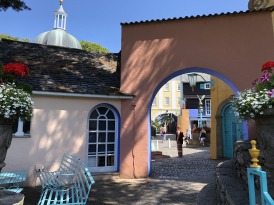 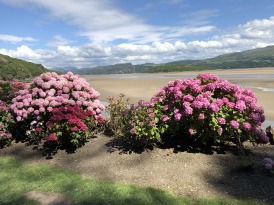 My final thought on northern Wales is this:  It is a strikingly scenic place.  We got to experience its beauty not just because we stood atop Mount Snowden or the turrets of seaside castles, but also because we fell victim to the wiles of Nigel, the GPS unit that came with the rental car.  If you read Part 1 of our UK trip, you know that Nigel relished tormenting us by taking us on labyrinthine routes on Britain’s narrowest roads, despite the no-nonsense route-finding settings we programmed into him.  More than once, we passed a highway sign that told us to turn, say, right, to get to our destination.  Nigel, of course, would tell us to go straight ahead.  Stupidly (and because these directional decisions always had to be made in a split second), we always followed Nigel’s dubious advice.  In fairness, we did always make it to our destination, but only after ages spent on hilly, meandering B-roads that forced us to a) slow down for more sheep on the lam(b), b) stop periodically to open and close gates, c) spend the whole drive worrying we’d meet another car head-on, and d) question why we were paying heed to this mischievous electronic trickster that was clearly having a laugh at our expense. 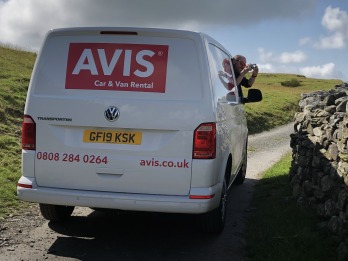 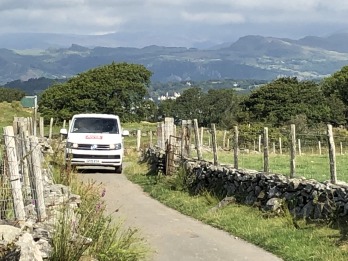 In the end, though, we wouldn’t have had it any other way.  Cumru am byth! 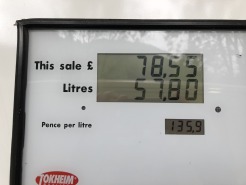