Climbing Mt. Sneffels had been a spontaneous decision based on location, opportunity, and foolish bravado.  Climbing DeCaLiBroN, on the other hand, was planned—calculated, some would say.  Whenever we start considering a visit to Colorado, the first question we ask ourselves is: Which 14er should we climb?  This time DeCaLiBroN was the answer.  But why DeCaLiBroN?

You’ve heard of a two-fer, right—two for one?  Well, DeCaLiBroN is a three-fer.  Three peaks in one go.  You see, DeCaLiBroN stands for:

If you’re paying even the slightest attention as you read this, you’re surely thinking: Wait.  That’s four mountains.  Why isn’t is a four-fer?

From 14ers.com comes this edict:

So now you know what kind of raucous debates break out when you get a bunch of topographers together in a room.  Don’t worry though . . . there are 53 “legit” 14ers you can attempt in Colorado alone.  (Most of the other US peaks of this altitude and higher are in Alaska, though you can find a smattering in Washington and California, and if you summit all those, I hear the Himalaya has a few.)

Anyway, the thought of upping our 14er total from four to seven in a single day was mighty appealing, so onto the itinerary it went.

This set of summits, by the way, is the reason we had to stay in the Fairplay/Alma area—the Kite Lake trailhead was a mere 5½ miles from our B&B (though the roughness of the road meant it took 40 minutes to get there).

Side note: do you ever carry cash?  I mean actual cash—dollar bills or whatever paper money is in circulation where you live?  We don’t.  (My parents have always thought this was crazy—must be a generational thing.)  Anyway, just before we left Minnesota we sold a window A/C unit that had been taking up precious storage space in the garage, so suddenly we were flush with twenties.  Two of them, to be exact.  Ergo, we had cash with us when we arrived at the Kite Lake Trailhead parking area, and it’s a good thing, too, because it turns out we needed to pay to park there.  Trouble was, the fee was five dollars.  I suppose I could have unselfishly handed over twenty bucks, but I’m just not that generous.

Anyhoo, the husband asked some people parked near us if they had change for a twenty and d’ya know what they did?  They refused to make change and instead insisted on just giving us a five dollar bill.  How cool and generous is that?  I could take a lesson in philanthropy from those people.

So as the husband got his gab on with our new, benevolent friends, I made my way over to the pay area (conveniently located near the pit toilets) and found a concrete pole, about waist-high, with a credit-card-sized slot in it.  I folded up the fiver and pushed it in.  Then I made a 90-degree turn and saw a pile of little manila envelopes, one of which I was supposed to have taken, filled in with our license plate number and vehicle information, and inserted with the five dollar bill.

Swearing under my breath, I grabbed an envelope, wrote on it that it was “really early in the morning and I wasn’t thinking straight and the loose five dollar bill in the concrete pole goes with this envelope and please please please don’t ticket our car.  Oh, and sorry for being such a doofus.”

Then we started the hike.  Mount Democrat was first, and made me wonder if members of the other major US political parties (Legalize Marijuana Now, US Pirate Party, Puerto Ricans for Puerto Rico Party) take umbrage at this mountain’s nomenclature.

Although this hike is roughly circular, there is a certain amount of backtracking involved, and it starts right after the first summit.  After climbing up, up, up, we had to climb down, down to the saddle between Democrat and the unofficial Cameron.  We were already thoroughly wind-beaten, but it was here that the wind decided to really let us know who was boss (hint: it wasn’t us).

After being nearly knocked down by one particularly violent gust, we learned to walk with a distinct sideways lean (best guess: 45º angle) to offset the gale-force winds, turning my latent neck kink into a persistent angry throb.

Then it was over to Mount Bross.

Now, all the guidebooks tell you that Mount Bross is privately owned.  How the heck people can own mountains I don’t know, but they do.  The books and maps also dutifully provide a peak-skirting alternate route so that you don’t actually summit the mountain. Because that would be trespassing.  (And in case you didn’t notice it in the books and maps, there’s also a helpful sign on the trail.) 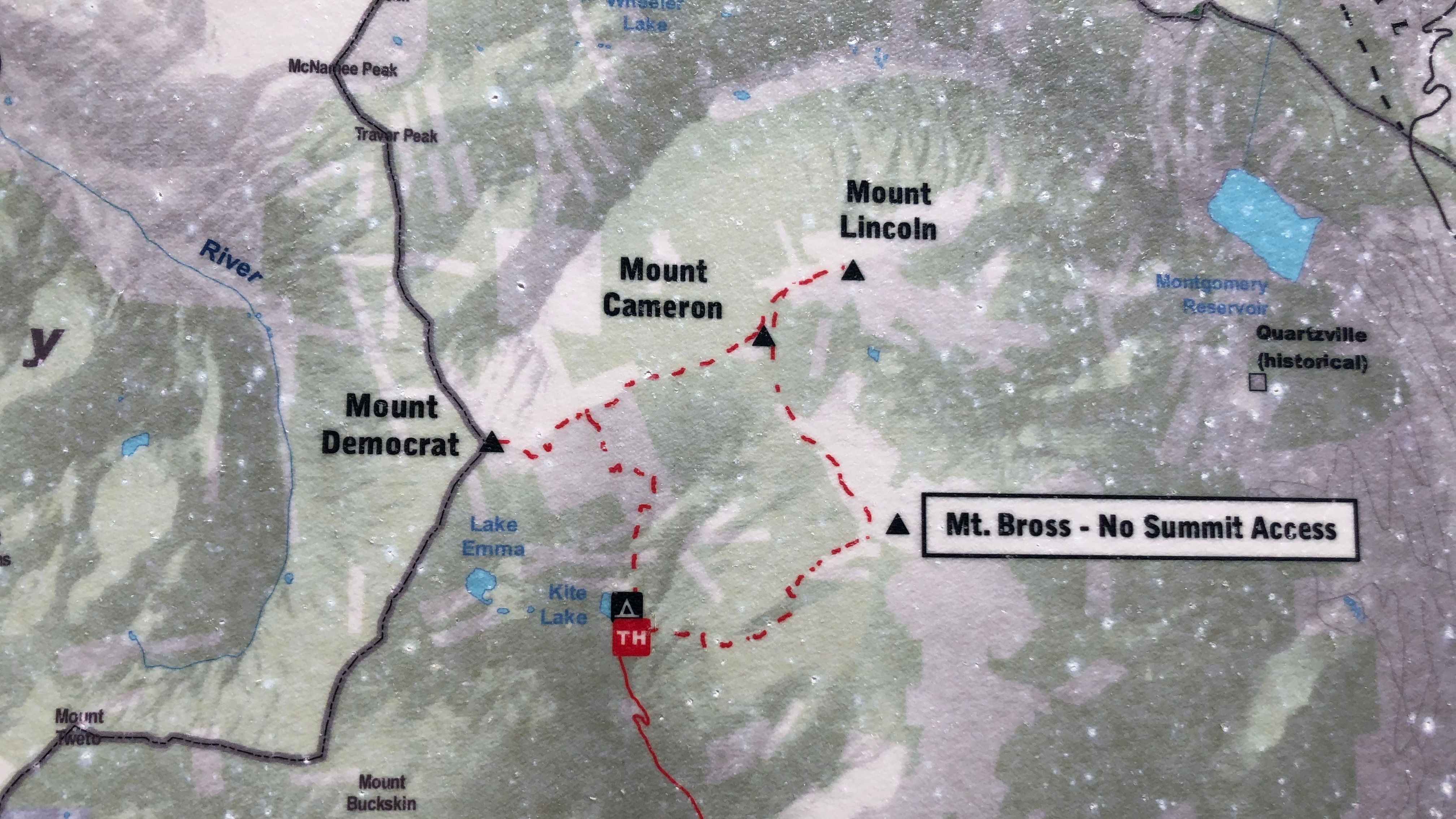 I doubt DeCaLiBroN hikers, many of whom have traveled from afar and all of whom spend loads of time and energy getting this far on their climb while nursing a feverish desire to knock off a trio (or tetrad, depending on your perspective) of 14ers, obediently step off the clear, unobstructed path to the summit and instead take the alternate trail with a shrug and an “Oh well. Rules are rules.”

So what about us?  Were we defiant scofflaws or angelic rule-followers?

The night before the hike, I read some online posts and trail reports from people who’d recently done the four summits.  There was a lot of whining about the Mount Bross down-climb—how it was a difficult scree-filled mess.  Well, I thought, after Sneffels, this’ll be a breeze.

I couldn’t have been more wrong.

The ugly route was long, steep, and treacherous.  Hiking poles helped but there were still several times when we nearly biffed it. Unglissadable, it was like walking downhill on marbles.  And at the risk of sounding repetitive, the wind was relentless.

Then finally, the end was in sight.

I love Solgaard's luggage and its environmental mission so much that I invested in the company. Get 10% off Solgaard products by clicking here or by using the code TRAVELARCHITECT when you check out. You get great travel gear, I get a small commission at no cost to you, and plastic waste gets removed from the world's waterways and made into highly practical, award-winning luggage. It's a win-win-win!