I know!  I couldn’t believe it either.  We’re going to San Antonio, Texas, for our four-day anniversary trip this fall.  I’m as shocked as anyone.

Never in my wildest dreams did I envision us in Texas.  Aside from some enticing natural areas, such as national parks like Big Bend and Guadalupe Mountains, Texas isn’t really someplace I look to for travel inspiration.  Yeah, yeah, I know about Austin, but for me, sitting and watching people play music (with the exception of orchestra concerts and fiddling, both of which I love) has the same excitement quotient as watching curling, or eating rice cakes, or standing in line at the post office.  You get the idea.

In my post requesting travel suggestions, a lot of people voted for New Orleans, but even though I’m the one who suggested it, and even though researching it revealed some interesting sites and activities, the husband and I just couldn’t get excited about it for some inexplicable reason.  Same with San Francisco, the runner-up in terms of our interest.  The truth is, deep down I’d fallen in love with the idea of going to Monterrey and Carmel in California.  We even went so far as to verbalize to each other that that was our destination.  But you know how sometimes you make a decision, and then it just nags at you for days in the back of your mind?  That’s what happened.  Practically speaking, from the moment we leave for the airport until the moment we arrive at the hotel, it would involve close to 8 hours of travel time.  That’s like going to Europe!  That is too much for a 4-day weekend and I knew it.  I just didn’t want to admit it to myself.

Then, someone calling herself Feistycat (later revealed to be my sister) commented on the blog post.  After giving Houston a good panning, she mentioned San Antonio.  She wrote of a Riverwalk, water taxis, and great restaurants and shopping.  My interest was piqued.  I looked into it.  “That’s it!” I cried.  A three hour direct flight, same time zone, perfect October weather, great looking hotels, far enough away from the ocean that hurricanes won’t be as much of a concern (hurricane aficionados, please let me know if I’m WAY off here), lots to do in a relatively compact area, but not so much that it overwhelms.  Done! 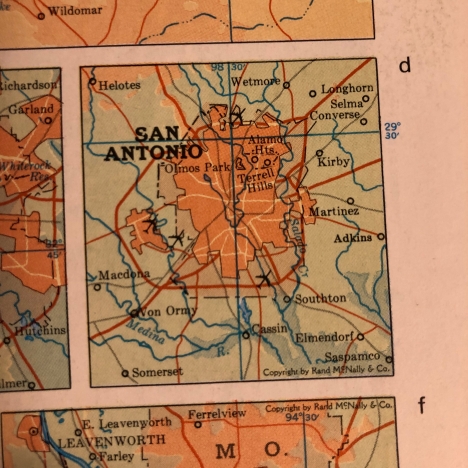 Based on my research thus far, here’s what seems interesting:

We’ll just have to save the Big Sur/Carmel/Monterey/San Francisco/Napa-Sonoma wine country trip (which now includes my latest obsession – Santa Barbara – as the starting point) for another time when we can dedicate a couple of weeks to seeing it properly.

The good news is the fact that, whenever I mention San Antonio to anyone who’s been there, the response is always extremely positive.  Whoda thunk it?!

In the meantime, if you have any suggestions about San Antonio – what to see, what to miss, peculiar Texan mannerisms I should be on the lookout for, or any cultural norms a lifelong northerner like myself might not be aware of – please do comment below.  I’d love to hear your thoughts.

*For those of you unfamiliar with this bizarre American state that thinks it should be its own country, that’s Texan for “I’m excited, everyone!”