Over several years and numerous trips to my fave state, we’ve made attempts at summiting three Colorado 14ers (53 peaks at 14,000 feet or above) and, save our most recent attempt on Mount Belford (spoiler alert: we made it!), we’ve always run into some sort of problem that’s forced a do-over.

In 2002, we were brand new homeowners.  The husband had recently finished grad school and was a probationary teacher.  I was in grad school and working part time.  In other words, we were poor.  However, we’d managed to scrape enough pennies together to take our first road trip.  Our destination was Colorado and in addition to exploring many towns in the central part of the state, one of my goals was to summit Mt. Elbert.  Hiking is free, after all.

We got similar directions to the trailhead from many people: take the left branch when the trail forked.  Well, we either misunderstood what everyone was saying, or we got bad directions (from multiple people?), but in any case, we started up switchbacks that looked exactly like the switchbacks on our map.  After a while, we got above treeline and the switchbacks kept going.  All good.  Then suddenly, the trail ended.  Unsure what to do next, we kept hiking, over a massive boulder field that slowed us way down and was physically challenging and burdensome.  As we picked our way over the large and often unsteady rocks, we noticed a small brown line in the far distance.  It was on the other side of a huge basin beneath the summit and had little specks moving on it.  Aaah – the trail we were supposed to have taken.  Dammit.  Oh well, too late now.  We kept struggling up the boulder field, eventually finding ourselves at the south summit.

Taking note of the dark clouds rolling in (bad), the time of day (noonish), and our fatigue levels (high), we sat hemming and hawing for several minutes over what to do – continue on or descend?  Ultimately, sense won out over ambition, and after scrawling our names on the ledger in a metal box (turns out the south summit is a 14er in and of itself, although it’s not classified as one on official lists due to certain arcane mountaineering rules) we stumbled back down the mountain, thoroughly spent.  Nine hours of hiking and only the south summit.  Ugh.

Five years later we returned to Colorado on the tail end of a long Southwest road trip to right the wrong that had been plaguing me for half a decade.  We finally nailed the bastard.  On the correct trail the whole time, it only took seven hours.  Yippee! 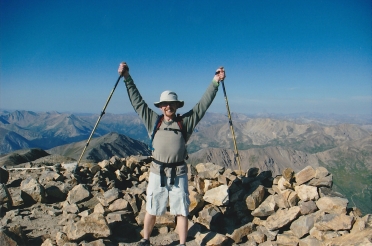 I’m the king of the world!

In 2016 we journeyed to central Colorado yet again.  This time, the plan was to knock off Mt. Sherman, an easy drive from our base in Leadville.  I had planned to wear the hiking boots I’d owned since I did a Colorado Outward Bound semester course 21 years earlier.  Though old, they were high quality, and I’d not used them often in the decades since my COBS course.  I grabbed them from their basement storage spot without giving them a second thought.

Once we parked our car, we were faced with another fun game of Can You Find The Trail?  We could see it in the distance, but couldn’t find a path that lead to it.  Ergo, we had to do a little bushwhacking to reach it. This involved inadvertently stepping in a small stream hidden beneath a thick wall of scrub.  Not a great way to start a climb, but we coped by muttering a few expletives, and kept moving.  Then, about halfway up the initial talus traverse, the front half of my boot’s sole became detached under the toe.

I wonder if I can ride my bike up here.

Ooh, a cairn. How helpful.

Undeterred, I redid my shoelaces so they wrapped around the loose part, and kept going.  Shortly thereafter, the same exact bit detached from my other boot.  Now the expletives were coming fast and furious.  I made the same “repair” and pushed on.  It was awkward, to say the least.  Unable to cinch them up tightly, I kept tripping on the floppy toes.  It was like wearing flip flops in reverse.  This would be less than ideal anywhere, but was particularly bad on a mountain climb.  The coup de grâce occurred about a third the way up the mountain, when the heels started to come loose, too.  Stubbornly (and yeah, okay,  foolishly), I announced that I was going to make some lacing adjustments and keep going, but the husband – exercising good sense, which seemed to have abandoned me – put an immediate kibosh on that plan.  It was a good thing he did, too.  He down-climbed while I down-stumbled and we made it back to the car just as both heels came completely off my boots.

Fortunately, Colorado has no shortage of mountaineering shops.  A quick zip down to the town of Buena Vista resulted in a new pair of boots (but, alas, not the British flag Speedos® the husband had misplaced at the town’s hot springs the day before) and we bagged the summit the following day. 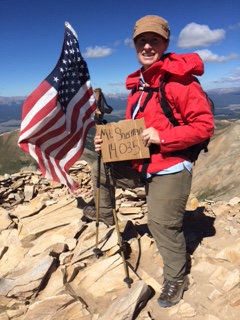 This is great ‘n all, but where are my Speedos, dammit?!

We just got back from yet another trip to Leadville, and despite an extremely late and snowy spring, and fears we weren’t going to be able to climb anything this year due to the conditions, we were able to get another 14er under our belt.

The drive to the trailhead was easy (washboard notwithstanding) and beautiful. 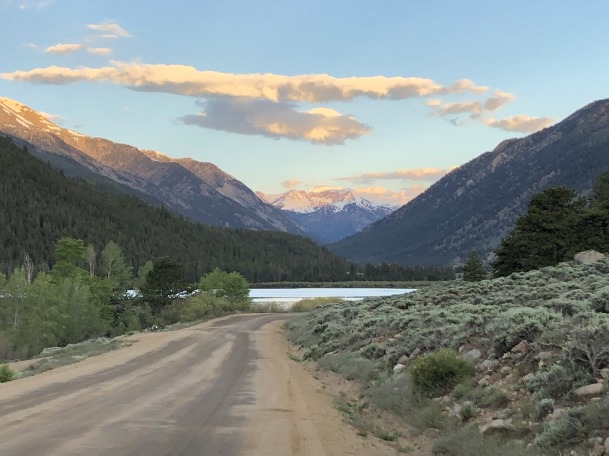 The trailhead was in-your-face obvious and well marked.  Mt. Elbert, you listening? 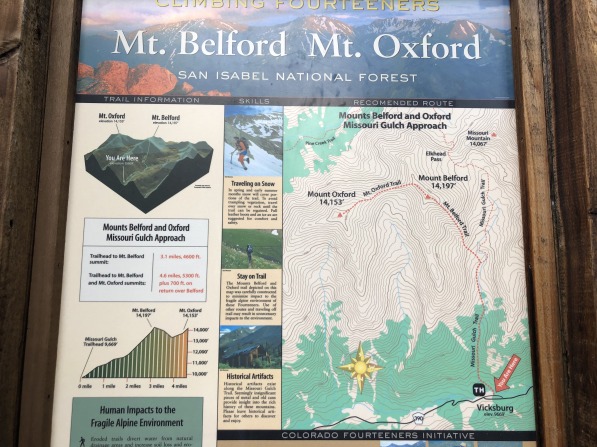 We had been warned that it was very steep up to the treeline, then flattened out a bit, then was unrelentingly steep to the top.  That warning was accurate.  (Thanks, Karen!)

We came across some avalanche debris that we’d heard about.  There was a Colorado Fourteeners Initiative crew working up there.

After reaching the cabin, which is right at treeline, we lost our way due to the snow pack and found ourselves on a big talus field AGAIN.  What is it with us?

It wasn’t as disastrous as when it happened on Elbert.  We probably lost half an hour picking our way over the rocks until we were able to meet up with the trail.

Once we got to the long summit ridge, the switchbacks resumed.  It was mostly a talus field, but with steps built in and trail included. 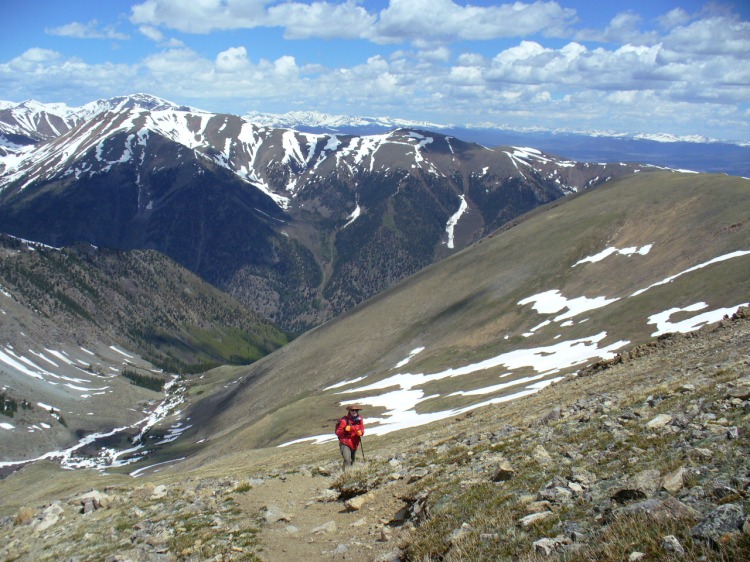 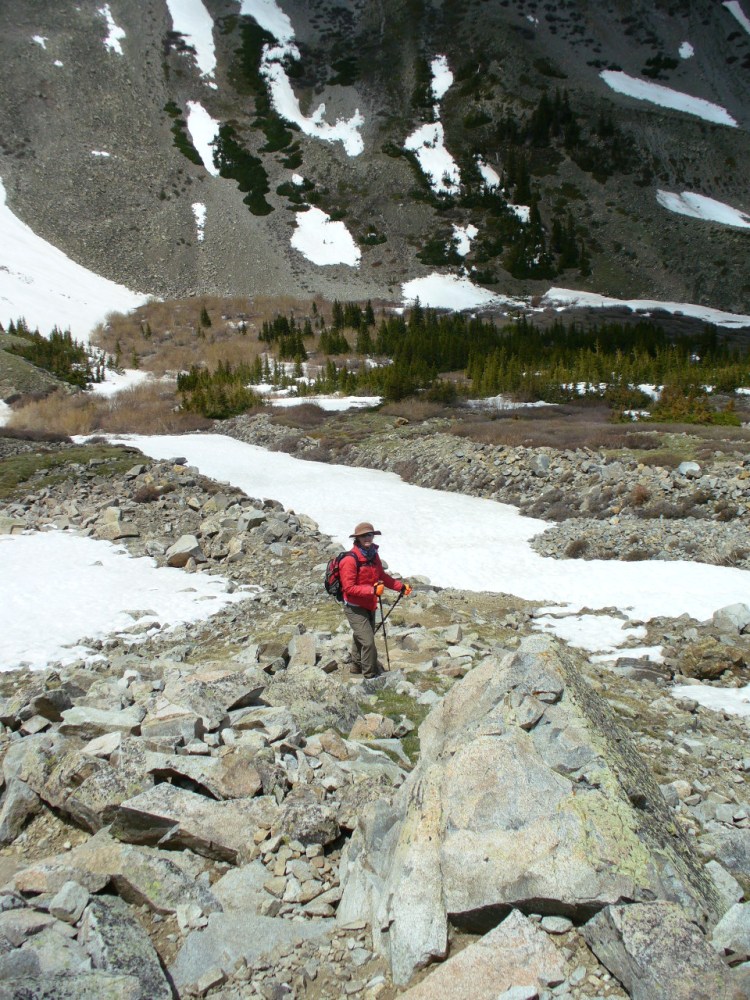 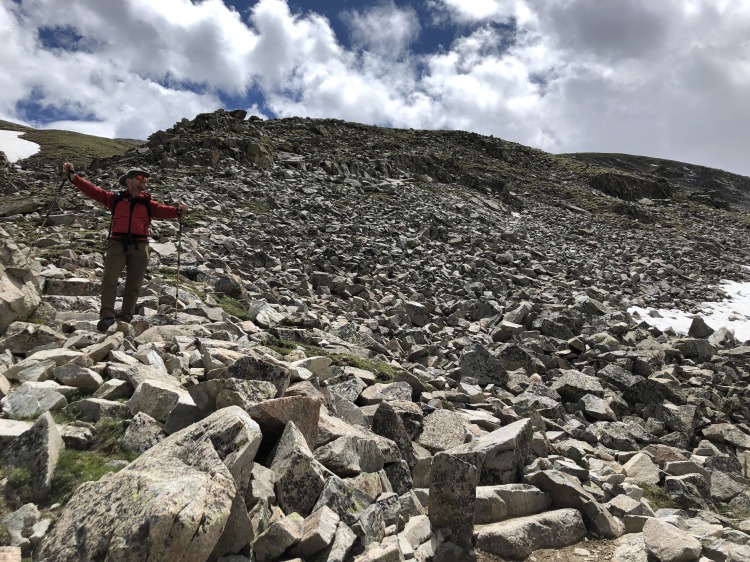 On this long ridge, the wind reeeally picked up.  At one point I was nearly knocked over by it.  Maybe it was age, or maybe it was the steep pitch combined with the headwind (actually, because of the switchbacks, it was more of a headwind-tailwind-headwind-tailwind…), but I took more rest breaks than on any of our previous 14er ascents.  It pains me to admit that.  How ’bout we keep that our little secret?

Shortly below Belford’s summit, we met someone who’d just come from the top.  She said, “You think it’s windy here?  Wait ’til you get to the top.  We couldn’t stand up.”

How right she was.  The picture below was taken just steps below the summit.  Up on top, there’s a coaster-sized metal plaque pounded into the rock to denote the summit.  Me telling you that is all the proof I can give you that we made it.  We couldn’t stand up.  We couldn’t take pictures.  We crouched and covered and screamed to be heard.  I was afraid the winds were going to tear my sunglasses right off my face and send them careering down the other side of the mountain.  The husband, who has sailing experience and thus is a better assessor of wind speed than I am, estimates the winds were 50 mph.  And these were not gusts.  This was a constant, unceasing wind.

On the descent, we did a little “heel glissading” to the best of our flatlander abilities. 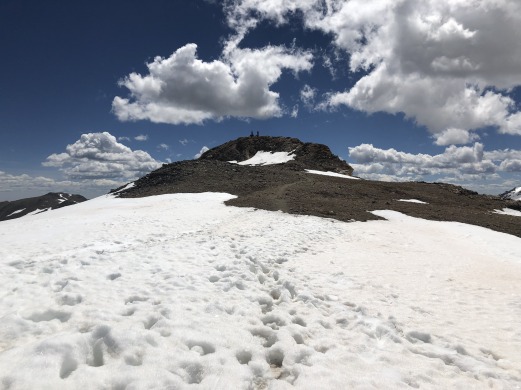 We also managed to follow footprints through the snow this time, keeping us on the right trail, even when completely covered.

On the way back down, we passed by the Colorado Fourteener Initiative workers again, and gave them hell for not having the avalanche debris tidied up.  I mean, c’mon, we’d given them something like six hours to do it.

True to form, I whined about my aching feet and knees most of the last mile, while simultaneously yelling, “Woo hoo!  We summited Mount Belford!”  But that was mostly to scare away bears.

On the drive back to civilization, we made a quick detour to The Trailhead outdoor store in Buena Vista to pick up the husband’s newest patch, which is at the tailor being sewn on as I write this.  (No, I can’t sew.) 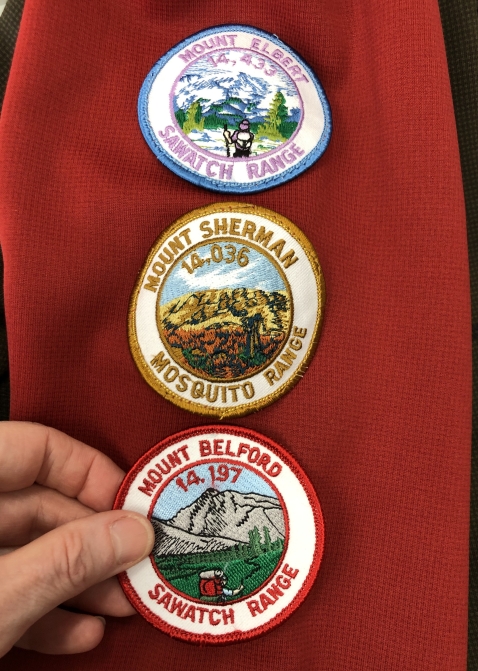 But wait!  Surely you want to know why the title of this post reads “… The Third Time’s the Charm… Sort Of,” don’t you?  It’s because right across the saddle from Mt. Belford is Mt. Oxford.  The only way to summit Oxford is through Belford.  We had intended to make it a two-fer, but given the winds, the time, and our exhaustion level, we pretty much knew half-way up the summit ridge that we weren’t going to have it in us to do the second 14er.  The idea of adding 2-3 more hours to that hike was unthinkable.  It’s OK.  We feel lucky, under the wintery circumstances, to have gotten to summit just one.

Stats according to the husband’s Garmin®: