*Bunny names have been changed to protect the fluffy.

As we ambled past the pet store at the mall, some bunnies near the front caught my eye.  They were for sale. (I now abhor this term and idea.  Never buy.  Always rescue.)  They were dang cute, and the husband—boyfriend at the time—mentioned offhandedly that rabbits could be litterbox trained.  We’d already established that I was a “dog person” and he a “cat person,” and that stand-off had necessitated a pet-free lifestyle.  Well, that and the impecunious circumstances that early twentysomethings often find themselves in.  But here was an adorable creature that wasn’t objectionable to either of us, would pee in a box, and seriously, how expensive could they be?

Ideas were quickly taking shape, but being just weeks away from bidding a bittersweet farewell to Montana and moving across the country to Minnesota (where we hoped to become significantly more solvent), I had to quell the thought, temporarily anyway.

Fast-forward to the Land of 10,000 Lakes.  After several days’ exploration we settled on a decent apartment in a great location, but I was dismayed to learn of their no-pet policy, so I hatched a plan and put it into action:  We lived as model tenants (we would have done this anyway, in case you had any doubt) for a full year, after which I wrote a letter—a very persuasive one, if I do say so myself—to the management requesting that we be allowed “one pet rabbit.”  I offered to pay a deposit, but refrained from calling it a damage deposit because why put that idea into their heads?  I mentioned all the ways we’d been responsible and ideal tenants (quiet, no parties, punctual rent payments).  I talked up all the things I thought a property manager would want to hear about a pet (No barking! No smell! Litterbox!) and conveniently omitted the negatives: they chew, and carpet fibers are a particular favorite.  I lied through my teeth when I wrote that the bunny would always be kept in a cage and would not be allowed to roam freely around the (wall-to-wall carpeted) apartment.

Clearly they didn’t see through my well-intentioned deception because, to my happy surprise, they relented!

Barely able to contain my elation, I dragged the boyfriend-turned-fiancé off to the Humane Society and we returned home as a little family of three.  We named our new bun Maxwell and set him on the kitchen’s linoleum floor, fencing him in with baby gates.  This, we had dutifully read, was step one in litterbox training.  Soon enough, Maxwell did his part.  He urinated (probably out of fear and bewilderment as much as any biological urge) on the floor.  Having already prepped his box with litter and hay, we merely wiped up the mess with a paper towel and placed it in the litterbox.  Et voila!  We had a litterbox-trained bunny.

Sadly, because those early years with Maxwell were so long ago, and because I don’t keep a diary, and because my memory is crap, I don’t have many tales to tell about our time getting to know our littlest family member.  He was a shy, reserved bun so it was a little more challenging to bond with him.  It wasn’t all his fault, though.  Never having had anything bigger than a hamster, I was a nervous, inexperienced pet parent.  One day, while lying on the couch, I asked the fiancé-turned-husband to put Maxwell on my chest.  Moments later, while attempting to snuggle and bond with my fur-baby, I felt a warm, wet sensation spread across my torso.  He had mistaken me for a litterbox.  I screamed, “Get him off!” several times, sprinted to the bathroom, stripped at break-neck speed, and jumped in the hot shower, utterly traumatized.  As I said: nervous and inexperienced.*

*Sometimes, when I reflect on my teaching career thus far, I think back to the students I had my first year and wonder, “Did I teach them a thing?  Poor kids.”  I get that same feeling when I think back to little Maxwell.  What a curse to have inept me as his human.

After a few years, we had enough money to buy a house.  (We had moved out of the realm of the “generally poor” but were about to become intimately familiar with the concept of “house poor.”)  We were excited by many aspects of this move, not the least of which was the prospect of getting little Maxwell a bunny friend.  Finally free from the autocratic “one child policy” of the apartment management regime, we could grow our little fur family as we saw fit.  The future was looking bright.  Little did we know the “adventures” that were lying in wait . . . 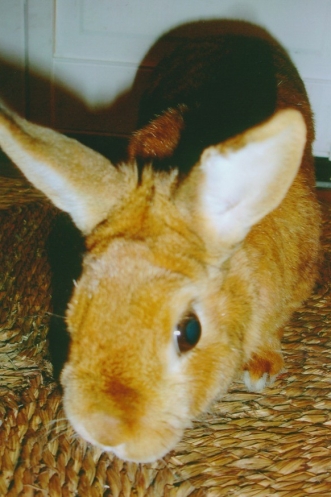 For the complete picture:

Follow The Travel Architect on WordPress.com
Join 2,529 other followers