We had three routes available to us as we made our way from Escalante, Utah, over to Ouray, Colorado. In the end, we elected to take one that combined Highway 46 (south of Moab) and Colorado’s Highway 90. It was supposed to be slightly longer than the way we had come several days earlier, but also more scenic, and we were not disappointed. Up and over a giant plateau, we were treated to colorful rock formations, swervy switchbacks, and expansive valleys. Towns were few and far between, and traffic was sparse. 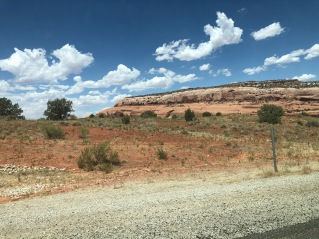 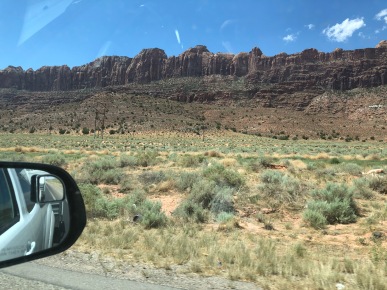 Pulling into our Ouray campsite, things got even better.  Once our trailer was situated, its door would open onto a gushing, gurgling section of the Uncompahgre River.  Bliss!

The view from our site

But first, we had to back in.  At one point, amid the bickering that always ensues at this point in the camping experience, I, standing behind Bobbie and helpfully guiding the husband’s reversing maneuvers with deftness and precision, noticed that one of Bobbie’s tires looked strange.  Wait.  Not strange . . .

The same way 18-wheelers litter the highways with their rubbery leavings, Bobbie had, somewhere along the way, sloughed off his tread like a snake shedding skin.  Where on our eight-hour journey had this happened?  How long had we been driving with a compromised tire?  Search me.  ¯\_(ツ)_/¯

Given the late afternoon hour, I sprinted to the check-in desk where an employee gave me the name of the only place in town she said could deal with this type of problem.  A panicked phone call brought good news: not only was the garage still open, they said, “Bring ‘er in!”  What’s more, it was only about a mile from the campground, and they had the correct tires in stock.  Whew! So far, so good.

After gingerly towing the Bobbie to the garage at ridiculously slow speeds, infuriating both locals and tourists alike, the mechanic removed the traitorous tire and revealed this:

Yikes!  Wrapped around the axle!  He said this could have caused several problems, including brake failure and our exterior plumbing pieces being torn asunder.  (The mechanic didn’t actually use the word “asunder”—that’s simply my translation.  Just doing my part to revive overlooked and underappreciated words.)  Later research revealed other “could haves” ranging from a deflated tire to total loss of control.  This same research exposed some culprits:

Boy, did we get lucky.  Much of our nearly 400-mile journey that day had been completely destitute of both civilization and cell phone signals.  There were so many ways this could have ended in catastrophe.  When it was time to pay the bill, I was so relieved to have dodged those bullets that I was uncharacteristically unfazed by the large and unplanned outlay of cash.

Anyway, disaster averted, we spent the next several days enjoying life nestled in the cool mountains of the San Juan Range:

The husband cycled the 50 miles from Ouray to Telluride over Dallas Pass.  I gave him a head start then followed over in the vehicle.  Though the husband has cycled many mountain passes of comparable length and difficulty over the years, for some reason this one took it out of him.  Also, no pictures exist, so I’ll ask you to envision me shopping Telluride’s historic main street with the depleted husband doing his best to keep up.

We hiked the 5-mile Upper Cascade Falls/Chief Ouray Mine trail which tops out somewhere above 10,000 feet and offers fantastic views of the surrounding peaks and the town of Ouray below. 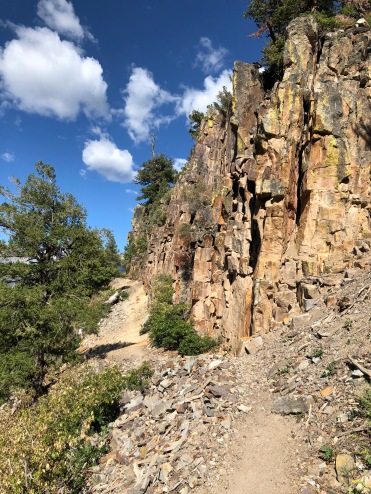 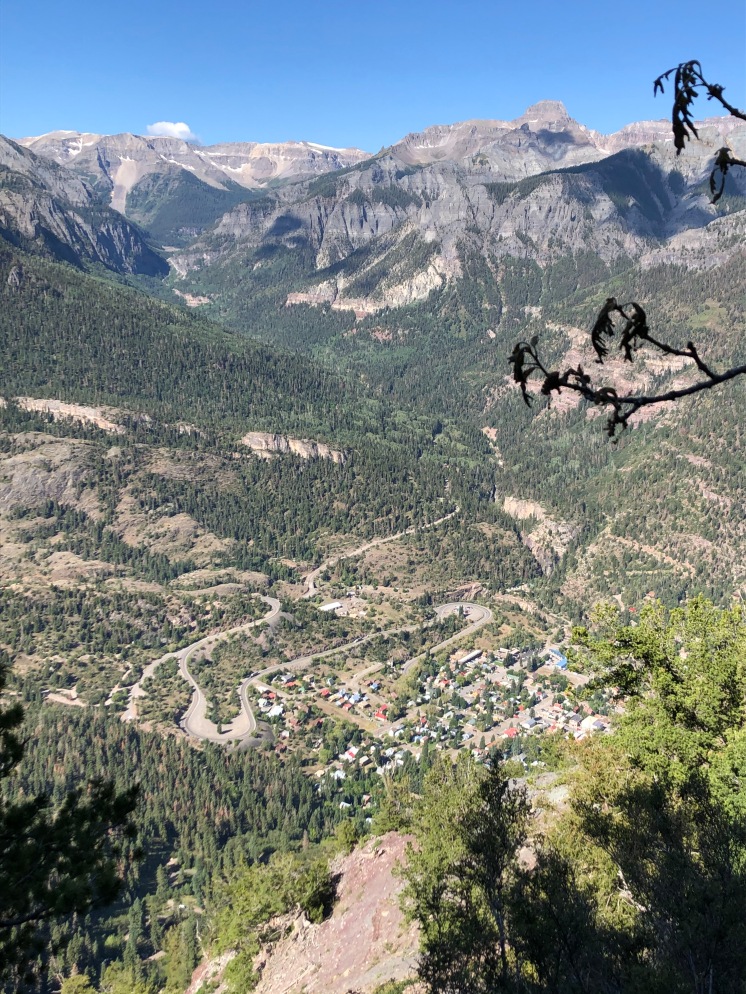 To the folks who had to drag up bedframes and woodstoves and mining equipment, not to mention construct mine buildings on this precarious mountainside, I don’t envy you. 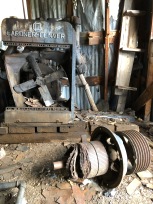 Though we had no intention of climbing any 14ers until we reached our next destination several mountain ranges to the east, we were encouraged by a badass Colorado friend (who is fifty years old and, as of this writing, has 54 of the 58 Colorado 14ers under her belt) to give Mount Sneffels a try.  She said it’s an “easy” Class 3.  I think badass mountain climbers like her have a skewed view of what “easy” is, but we let ourselves be talked into it anyway.  However, since this post is already a bit on the long side, I’ll save that ’til next time . . .