If you’ve been following this blog for a while, you know that the husband and I usually have different weeks for spring break – a repeated misfortune that has cost us no end of vacations – and this year was no exception.  You may also recall that, after an anguishing mental tug of war, I opted – reluctantly – for a home-based Midwestern to-do-list-focused spring break staycation.  (Ugh.  I’m boring myself just writing that.)  The husband, trying to even the score after my last two years of spring break travel to the Southwest, chose to take his first ever solo vacation: bikepacking* in Utah.

*Bikepacking: like backpacking through the wilderness, but on two wheels instead of two legs.

I thought it might be interesting to document his travels by contrasting them with the exciting ways I spent my time during his absence.  We’ve enlisted the help of one of this blog’s loyal readers and frequent commenter, Dave C. (aka Selfie Hater), to determine the winner of each day.  Welcome, Dave.

The husband: Up early, he made his way through Minnesota, driving longingly past the Spam™ Museum – a place he’s always wanted to visit, but that I’ve always put the kibosh on – through rainy Iowa.  Entering Nebraska and expecting the interminable hours of utter boredom one normally finds on its interstate, he instead encountered a wicked spring blizzard that had him seriously considering bagging the trip.  Mindful of the amount of money he spent on both the bike and the ancillary gear required for this trip, not to mention months of planning and anticipation, he slowed down but pushed on, finally stopping for the night in Denver, a good deal later and far more tense than expected due to the white-knuckle storm traverse.

The Travel Architect: Up just as early, I had a day full of exciting activity, including emptying the dishwasher and washing dishes by hand.  I wasted an undetermined amount of time futilely scrolling through the pet-sitting website we just joined. I also folded laundry (which revealed a sock I had been missing!) worked on blog posts, got a full-body massage, and got Thai takeout, which I ordered at a spice level “4” (out of 6) and could barely eat.  In the evening, my attempts to concentrate on a movie (Three Billboards Outside Ebbing, Missouri) were thwarted by incessant worry over the husband’s battle against Mother Nature.

Dave’s verdict:  This is a tough call. While white-knuckle driving through blizzards is horrible, it is at least memorable. On the other hand, the Travel Architect’s day is pretty darn low on the excitement scale. I give the Travel Architect a close win due to the finding of the missing sock. Hope this story gets a lot better…

The husband: He drove from Denver to Moab, which would have been 100% great but for the clouds and rain, and the crazy driver who almost ran him off the road.

Eventually the clouds lifted, his mood improved, and he began to enjoy the scenery (because he could see it).  Snagging the very last available hotel room in Moab, he then rode his bike into and around Arches National Park, where he endured plenty of near misses from distracted drivers ogling the rock formations from their 100-foot RVs.

The Travel Architect: A day of serious adventure, I attended kickboxing class, met with a neighbor to review the cat-sitting duties I would start later in the week, and finally exchanged our Christmas dishes for our everyday dishes (before April – good job me!).  I also got saddled with the husband’s task of changing the bunny’s litter box.  (I should get extra points for that one, Dave.)  Time spent on pet-sitting website?  Undocumented… and you can’t prove a thing!  Ordering pizza for dinner (I find cooking for one depressing, especially when I can’t pass off clean-up duties to the husband), I watched a movie with better focus than on Day 1, now that the husband was out of harm’s way.  Unfortunately, today’s movie (The Hundred Foot Journey) was just OK.

Dave’s verdict: Wow! This one isn’t even close. Driving to Moab in less than perfect weather on roads with bad drivers still involves getting to Moab. It is a great place. The Travel Architect’s day sounds like what I would expect if I was stranded alone in a base on Mars. This round goes convincingly to the husband.

The husband: After a surprisingly good hotel breakfast, marred only by the presence of many loud and unruly children, he drove from Moab to the start of the bikepacking route in The Middle of Nowhere, Utah.  With high hopes, he hopped on his gear-laden bike and proceeded into the canyon-y wilderness of the “Behind the Reef Trail”.

He soon encountered a group of bikepackers who were hanging it up early.  Turns out things were not quite as idyllic in bikepacking land as everyone had believed.  Undeterred, the husband pushed on, ultimately getting lost and about half as far as he’d intended due to the rock-strewn tracks that were meant to pass as a cycling trail.  He made do with a tree for his shelter, ate cold food, and slept on the ground.  (Don’t feel sorry for him, people.  This is what he signed up for.)

The Travel Architect: I talked myself into going for a run, which I didn’t enjoy one bit, finally put away the folded laundry from Day 1, worked on and caught up with blog posts, and made banana bread, making sure to restore the kitchen to it’s high gloss shine afterward.   In the evening, I binge-watched This Is Us, staying up way too late for a school night.

Dave’s verdict:  I’m starting to see a pattern here. If one accepts the premise that pleasure is merely the absence of pain, the Travel Architect is dominating. However, I admire the spunky recklessness of the husband in pressing on despite the many signs of impending catastrophe. That is an approach that regularly played a major role in our own family’s vacations. It’s close, but I call this day for the husband.

The husband:  After just one night in the wilderness, and a series of grueling adventures, he biked has way out and reunited with the world at large.  Mentally scarred by two falls, lack of food, unreliable route description (he now realized) and still traumatized by his death-defying drive through Nebraska while simultaneously fearing an imminent change in the weather, he decided to return to Denver. 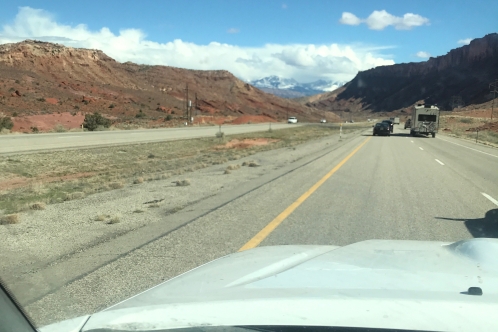 The Travel Architect: Rising early, I attempted to seize the day with some Insanity® in the basement.  I went to work for the first time in ten days where I mirrored the tired, vacant, Are-we-really-back-here? looks I saw in the eyes of every student and teacher I encountered as I made my way, zombie-like, through a day of teaching.  That night on the phone with the husband, I discovered he was now planning to be home by the end of Day 5.  Operating under the belief that he would be gone a full 7-8 days, I became alarmed and encouraged him to stay and enjoy all that the Southwest has to offer.  I said strange things that don’t normally come out of my mouth like, “Go ahead and get the fanciest hotel room you can find.  Treat yourself to opulent dinners.  Go back to Arches.  Better yet, spend some time in Glenwood Springs on your way back.  They have hot springs!”  I tried to be persuasive and upbeat while keeping the panic out of my voice.  Finally admitting defeat, I spent a final night binge watching more This Is Us (I’m almost caught up now!) far past my bedtime, knowing my solo bachelorette party of ordering in, hogging the TV, and lazing on the couch were coming to a too-rapid end.

Dave’s verdict: Well, so much for the spunky recklessness of the intrepid husband. This is now taking on the feel of a late night reality TV program on one of the channels you come to just before foreign language programming kicks in. The husband wants to recover from nightmare vacation PTSD in his own home while still  facing another winter weather drive of over 1,000 miles. The Travel Architect wants him to stay away so that she doesn’t have to share her bon bons. The Travel Architect wins the day on points but is raising some doubts in my mind about her basic sense of humanity. You can always buy more bon bons.

The husband:  Motivated by the thought of a joyful reunion with me, I’m sure, the husband endured an all-day driveathon once again, but this time in the unsavory direction (that is to say, away from the mountains).  Driving 13 hours and dining on gas station fare, he arrived home to his wife and bunny spent but happy, and already thinking about his next bikepacking trip.

The Travel Architect: Billy Blanks and I air-boxed each other in the basement.  (It was a draw.)   I went to work.  I came home and stared forlornly at my clean, largely unused kitchen, knowing it wouldn’t look this magazine-photo-shoot-ready again for a long, long time.  Despite my reluctance to surrender my life of hedonism, I’ll admit to a sense of growing excitement as I received one-word texts while the evening wore on:  Lincoln.  Omaha.  Des Moines.  Minnesota.  Spam.  After a happy reunion, I got the low-down on his adventures before declaring, “You’re never going bikepacking again,” and going to bed.

Dave’s verdict: Clearly a victory for the husband and for the human race in general. Like Moses coming out of the searing desert or Odysseus returning from Troy, the husband overcomes almost unimaginable obstacles to finally find his way home. Or maybe an even better analogy is the old movie where the dog and the cat cross the entire country to return to their family’s home (I believe that it was called the Incredible Journey). I’m not sure whether the husband is the dog or the cat, but he is certainly one of the two. (His truck probably smelled like a litter box at this point, too).   On the other hand, I don’t recall any award- winning films whose plot line involved sitting on a couch and chowing down on take-out food.

Overall winner: If the story had ended with the husband being struck dead by a meteorite while riding on a snake infested abandoned gravel road, the Travel Architect would have eked this one out. As it is, I rule in favor of the husband. He demonstrated the intrepid bad judgment that has been a defining feature of humanity since our earliest relatives stepped out of the cave. He is, in so many ways, a direct descendant of the prehistoric man who one day decided to find out if Saber Tooth Tigers are as tough as they look. “Good on ya”, as they say in the Outback.