As I mentioned in Oh the Places I’ve Been: Breadth vs. Depth, I’ve visited England many times, largely because it’s where all of my in-laws live.  Usually when I’m travel architecting a trip to England, the husband – who went to university in London – makes a big push for spending at least a few days in the capital city.  So far, he’s always gotten his way.  Of course, it helps that London is where our plane usually lands.

Don’t get me wrong.  I like London.  It’s major league.  It consistently ranks among the top three most visited cities on the planet, and with good reason.  It has it all: history, royalty, art, culture, nightlife, parks, dungeons, castles, architecture, and gastronomy.  And nothing beats the accents.  As writer Samuel Johnson famously averred, “When you are tired of London, you are tired of life.”

However, I don’t feel compelled to keep returning to the city each and every time we visit the motherland.  On our most recent trip, however, it was going to be necessary.

We were there to participate in the 2019 Prudential Ride London cycling event.  This is an annual closed-road bike ride in three distances: 100 miles, 46 miles, and 19 miles.  Way back in the early planning stages, the husband hatched a crazy scheme in which he would cycle from Charing Cross in London to Beaumond Cross in his hometown of Newark.  I, in turn, would drive the rental van (on the left side of the road! seated on the right side of the car! using my nondominant hand to shift! while jetlagged!).  You can imagine my relief when he discovered the Ride London event.  A proposition was made.  A compromise was reached.  Instead of the aforementioned lunacy, we would enter the Ride London lottery, arrange our travels to put ourselves in London on the weekend of the event, and hope for the best.

Months later the cycling gods smiled upon us.  By some miracle, we both got into the ride – I into the 46 miler and the husband into the 100.  And so it was that after 2½ weeks of adventuring around England and Wales, we drove (for the first time ever) into the heart of London at, of all times, late afternoon on a Friday.  Then again, though that’s the rushiest of the rush hours where I live, I highly doubt there’s ever a good time to drive a car into London.

But first things first.  We stayed at a place we are quite familiar with, having lodged there on several previous occasions: The Mad Hatter Hotel.  With rooms above and pub below, it’s splendidly located on the south bank of the Thames, a few steps from where Blackfriar’s Bridge meets Southwark, a stone’s throw from the Tate Modern and Shakespeare’s Globe, and within walking distance of the London Eye, Millennium Bridge, St. Paul’s Cathedral, Tower of London, and Houses of Parliament. 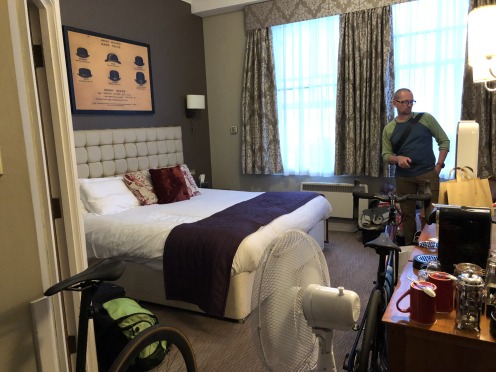 Unfortunately, and though you may not be able to tell from the pictures, the place has taken a noticeable downturn since the last time we were there.  Things were just… shabbier.  The place looks run down.  I looked to see if I could use “careworn” with an inanimate object such as a hotel room, but it appears to be a term reserved for humans.  Still, you get what I’m trying to say.  According to the manager, they are in negotiations to purchase the adjoining building and planning a complete remodel, so they are still in the running the next time we find ourselves in London, because there will be a next time, and the location can’t be beaten.

With just two free days in London, and having seen most of the major sites on previous visits, we engaged in some perhaps lesser-known activities while in The Big Smoke.

Last Christmas, I promised the husband I’d try to become an English soccer fan – specifically, a supporter of his beloved team: Arsenal.  For the most part, I’ve failed.  Enjoying televised sports (except the Olympics) just isn’t in my DNA.  However, as a consolation prize, I booked us tickets to tour Arsenal’s Emirates Stadium, which is NOT a stone’s throw from the Mad Hatter.  It’s way the heck out there, but, it turns out, well worth the time and effort. 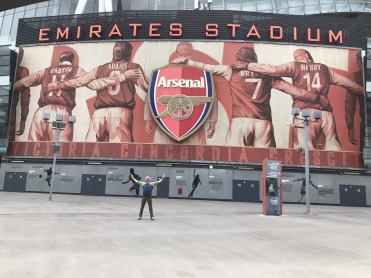 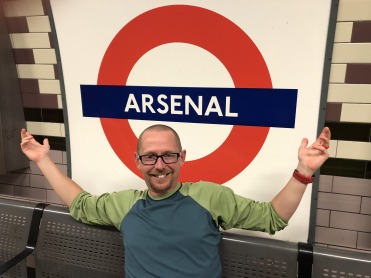 You see, even I, sports eschewer that I am, found the self-guided tour (pre-purchased online at $35 per person) well organized, interesting, and enjoyable.  Needing only to don the headphone contraption and keep an eye out for signage, the tour took us to all the behind-the-scenes places including: 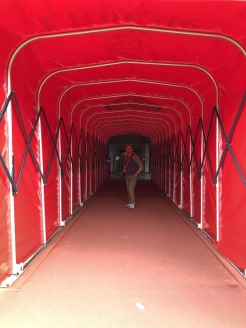 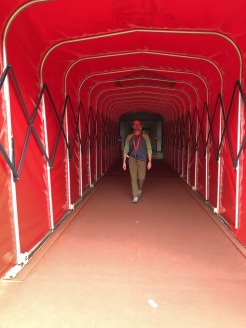 Fantasizing about being head coach.

So, d’ya think they’d give me an interview?

And of course, no Emirates Stadium tour would be complete without lingering in their massive gift shop, where the husband made mincemeat of our travel funds.  The only thing that would have made the tour better for him is if we could have seen the team play.  Even I might have enjoyed that. However, we were there in the off-season, so it wasn’t to be.

Located in the area known as Covent Garden, this museum was one the husband had always wanted to see.  Not something that requires advanced tickets or has long lines, it seemed like the perfect way to spend a few hours. 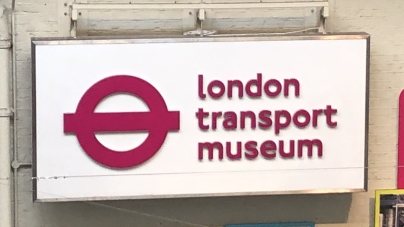 In fact, it was just OK.  It had some great old vehicles and plenty of interesting information, but it also had kids.  Lots and lots of noisy kids.  It wasn’t a children’s museum exactly, but neither was it a full-on adult-centered experience.  It was an unfortunate hybrid that made it difficult to concentrate on all the informational plaques.  (And this, from a seasoned teacher of elementary students.) 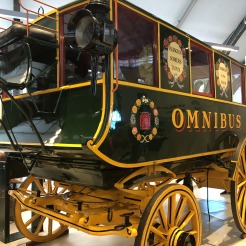 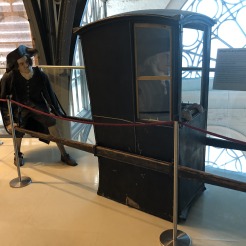 Worse yet, I had been expecting an interesting exhibit on the genesis of London’s new (or at least new to us) bicycle superhighways.  Sadly, there was nothing, so here’s my tiny exhibit on these wonderful creations that should be in every major city:

There were several great things about this ride, aside from the obvious (no cars!).  First, London is wonderfully flat, especially in comparison to the other parts of Britain we had been cycling in.

Second – and those of you in snowy regions will really appreciate this – the roads are as smooth as a baby’s bottom.  Without the freeze-thaw cycle that plagues colder climates, the roads are blissfully free of potholes.

And finally, a mild worry was who was going to have to wait for whom at the end, and for how long.  The husband’s 100-miler started at 6:45am, while my 46-er started at 9:30.  Unsure what our average paces would be (and even if we could somehow be sure, that’s a cruelly complicated math problem for a mathophobe like me), we just hoped for the best.  In the end, we finished within one minute of each other, and thanks to the miracle of cellphone technology, located each other right away.  Beautiful!

Upon meeting up with the husband, I had the audacity to declare, “I’m not even tired!”  In the minutes it took to get my medal and retrieve my personal goods bag, however, my leg muscles began to seize up.  The unnerving two-mile cycle ride back to the hotel revealed three things: those brilliant cycling superhighways are not ubiquitous in London, traffic is crazy there all the time (especially fun was being sandwiched between the curb and a double-decker bus), and in fact, I was tired.  I spent the rest of the afternoon splayed out on the bed, doing half-hearted stretches and watching a Friends marathon.  Perhaps not the most British way to spend an afternoon, but it was just what my battered legs needed.  That night, I slept like a rock for 10.5 hours!  (My average is 7.)

Our last evening in London ended on a high – both literally and figuratively.  Thanks to Janine Thomas’ blog Gastrotravelogue, I became aware of London’s relatively new Sky Garden and the Fenchurch Restaurant housed within it.

Ever since the husband semi-surprised me with a luxury dining experience in the Eiffel Tower’s Jules Verne restaurant a few years ago, I’ve wanted to somehow return the favor.  Hoping to avoid the comedy of errors that preceded the Jules Verne experience, I booked dinner at the Fenchurch, revealing to the husband only that I was planning a fancy dinner and that it had something to do with one of my hobbies: gardening.  As predicted, he was baffled. 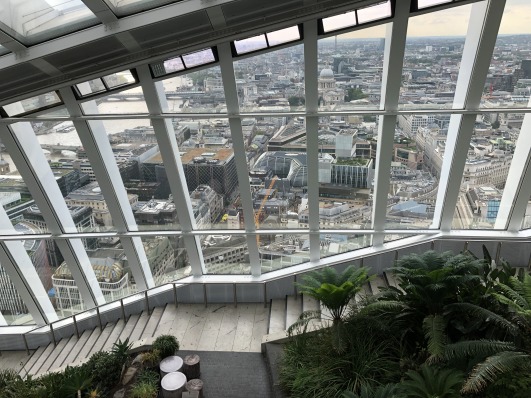 Housed on the top floor of one of London’s tall buildings, Sky Garden, per its website:

…is a unique public space that spans three storeys (sic) and offers 360 degree uninterrupted views across the City of London. Visitors can wander around the exquisitely landscaped gardens, observation decks and an open air terrace of what is London’s highest public garden.

Londoners have a penchant for assigning nicknames to their uniquely shaped buildings.  Sky Garden is located at the top of a building referred to as the Walkie-Talkie.  Personally, I don’t see the resemblance, but what do I know?

Oops, I went off on a bit of a building-naming tangent there.  Getting back to Sky Garden and the restaurant… In brief, Fenchurch Restaurant has amazing views, food, and service.  It’s a fancy-schmancy fine-dining experience, so expect prices to match (although it was less expensive than the Jules Verne, despite a less-favorable exchange rate).  Afterward, we walked down a few steps to the Sky Garden, which by that time had filled with people enjoying the Sky Bar.  By the way, entrance to Sky Garden is free, but you have to reserve in advance.  Here are some bird’s eye views: 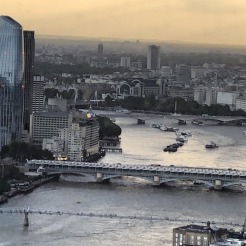 And a few more shots of the interior:

It’s not like one deserves a reward at the end of vacation.  True, this trip did involve some suffering (think cycling outrageously steep hills in the Peak District and surviving the Crib Goch death climb), but travel is generally not some onerous experience that requires a reward to get through.  Still, this flora-infused dining experience felt like one and was a great note on which to conclude our travels.

The Travel Architect’s takeaway: Next time, convince the husband to leave the bikes at home, rent a small car for the trip, don’t opt for an additional driver, and ditch the car before reaching London.  Oh, and never trust your GPS unit.