When Bad Things Happen to Good Travelers, Episode 5: Not a Stellar Trip

To all my fellow Americans out there, do you remember witnessing the much-anticipated astronomical event that captured the country’s imagination in the summer of 2017: the total solar eclipse?

I’m going to tell you why, so brace yourselves for a pity party of galactic proportions.

Hey!, we said to ourselves, an eclipse is coming!  A total solar eclipse.  In summer – how convenient!  Our trip to France will be over and done with by then.  But where to go?  Missouri is in the path of totality.  That’s not that far away.  Totally doable. 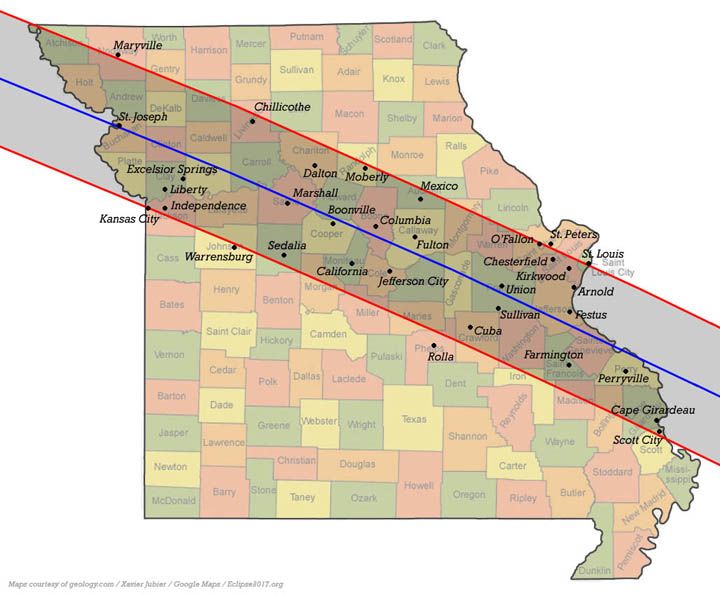 So I began planning.  For the record, going to Missouri does not get my travel juices flowing, but we both genuinely wanted to witness this cosmic spectacle.  Also, there was a perk: if we went somewhere near Kansas City, we could make a foray into downtown – fresh from viewing this spine-tingling interstellar event – and finally have dinner at Lidia’s Kansas City.  Long fans of Lidia Bastianich’s PBS cooking show, Lidia’s Italy, with her adorable, somewhat bossy mother and emotionally torpid son making the occasional appearance, we knew she had several restaurants dotted across the country, and had always wanted to try one out.  It would be a celebratory end to a noteworthy day.

With St. Joseph, Missouri, slated for over 2½ minutes of totality in the late morning of Monday, August, 21, and with Kansas City a mere 45 minutes farther south, we made that our landing pad for Eclipse 2017.  Hooking up our little Bobbie, we drove what should have taken less than 6½ hours, according to GoogleMaps®, but which actually took 8½ due to a combination of eclipse traffic and road construction.  Where we live we have a saying: “There are only two seasons – winter and construction.”  Apparently nearby states are cursed with the same problem.  And for those of you unfamiliar with a drive from Minnesota to northwestern Missouri, I’m here to tell you it is boooor-ing.  Nothing but grass, trees, and farmland, and flat, flat, flat, so the two extra hours were not appreciated.

Eventually we made it to our destination.  As we had been for several days, we continued to check the weather forecast obsessively, like a groom and newly-permed bride on the cusp of their large outdoor wedding with no backup plan.  The following day’s forecast was looking iffy, but we went to bed telling each other to stay positive.  The next morning things started out OK, but as we reached mid-morning, it started to mist, and then the mist turned into a steady rain.  As the minutes ticked by, with no let-up in the precipitation, our moods began their meteoric plunge.  People were gathered, adorned in brightly colored rain slickers, heads tilted back and fingers crossed in hopeful anticipation, but it wasn’t to be.  Through the thick veil of clouds we could barely make out the start of the moon budging in front of the sun like a naughty schoolboy.

Yes, during the two minutes and 38 seconds that the moon was blocking the sun, we in ill-chosen St. Joseph could sense a change.  It got somewhat darker – like a cloud passing in front of the sun on a warm summer day, but more intense.  Still, it couldn’t hold a candle to what my mother and brother were experiencing on the other side of the state in crystal clear St. Louis.  Nor could it compare to what my sister and brother-in-law witnessed from their viewing location in Oregon, or any of the million other places along the path that had clear, unobstructed, awe-inspiring views.

And then it was over.  The interstellar orbs went on their merry ways, oblivious to our bitter disappointment.

After a time, though we had descended into a black hole of gloom, we got changed and started to drive south.  We figured we’d kick around Kansas City for a bit before our early dinner reservation, but we weren’t even out of the St. Joseph city limits when the traffic began.  Stop and go, and stop some more.  Both of us in foul moods, we tolerated this for maybe 20 minutes, until we finally said f&%# this!  It’s not that we were going to be late for our reservation.  We simply did not have the mindset necessary to endure two hours in stop-and-go traffic on a drive that would otherwise take 45 minutes.  A quick search on the phone had revealed a map criss-crossed with red, every possible route into Kansas City a parking lot.  We called and cancelled our reservation, then made our way back to the campsite where the husband suddenly, loudly, and unilaterally proclaimed that we were leaving.  Furious with him for his extreme bossiness (and also because my pent up rage needed an outlet), but not wanting to stay either, we packed up as quickly as we could, departing a day earlier than planned, bickering and snarky with each other over events that neither of us could control, but which were clearly controlling us.

We drove north in stony silence until it was broken by family members, ignorant of our misfortune, eagerly reaching out to trade eclipse stories.  First it was my mother, calling to wax poetic over the dance of the celestial bodies she had just beheld.  Through clenched teeth, I told her I couldn’t talk about it just then, explaining in clipped tones that we hadn’t had quite the same transcendental experience.  Next up was a cheerful text from my sister detailing her magical view of the solar-lunar face off.  Delete.  Eventually we reached Interstate 80.  We turned east and kept driving until we came to a traffic jam.  Now, I’ve been in traffic jams before.  Mostly on the way to work.  In a major metropolitan area.  During rush hour.  This was not that.  This was a major US interstate that runs from Chicago to the Pacific Ocean.  It was a clear (oh, sure, NOW it’s clear) August day.  Why the hell were we stopped?!?!?!?!

Inching forward with thousands of other vehicles for who knows how long, GoogleMaps® came to our rescue once again as I, the navigator, devised a backroads plan to keep us moving apace.  Along with a handful of like-minded (read: impatient) drivers, we got off at an exit for nowhere, USA, and weaved our way through tiny villages on small roads as darkness descended.  After what seemed like ages, we hooked back up with the interstate – functioning normally now – just outside of Des Moines, Iowa.

We’ve driven this I-80 route to Des Moines more times than we can count, because we often travel out West.  With all those boring drives pretty much indistinguishable from one another, neither the husband nor I can recall whether we collapsed in angry slumber in some Walmart parking lot, or whether we stubbornly pushed on until we reached home.  Frankly, it doesn’t matter.  The trip was over, and it had been a waste.  I’m not exaggerating when I say that it took me a good six months before I could talk about the eclipse without getting mad.  In fact, even while writing this I could feel my breathing become shallow and my mood slip back toward the abyss.

There’s another total solar eclipse coming in 2024.  Friends in Arkansas, aware of the 2017 fiasco and taking pity on us, have invited us to view it at their house, which will be near the center of the path of totality.  As an added incentive, the totality in their neck of the woods will last about 4’20” – nearly twice as long as it did in Missouri. 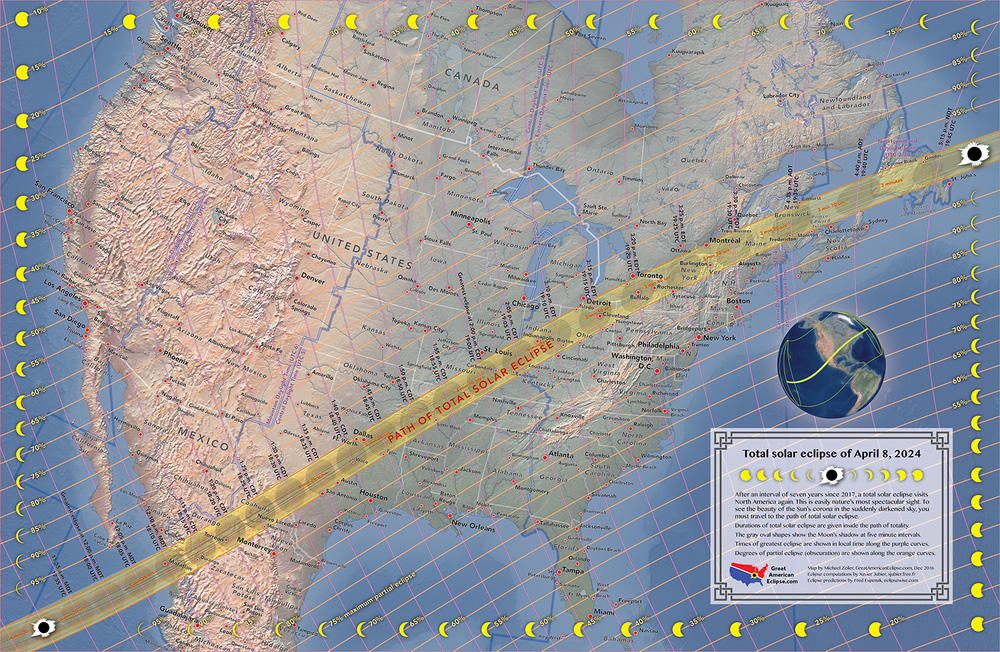 However, not only is it inconveniently placed on a Monday in April (teaching calendar and all), I’m not sure our hearts will be in it after the Missouri failure.  After all, it rains in Arkansas, too.  Note what the bar graph below is telling us: April is the rainiest month of the year in Russellville, where our friends live.  I don’t think we could stand another disappointment.

The good news is that a total solar eclipse will occur practically over our house in 2099.

The bad news is that we’ll be dead.

The tragic tales in the When Bad Things Happen to Good Travelers series: