The husband doesn’t actually remember the first time we met, but I do.  It’s not often you walk into a store in western Montana, approach an employee for help finding a George Winston CD, and get greeted with a British accent (dialect, technically, but what the hell).  I ended up marrying him and for more than two decades we’ve co-existed (mostly) peacefully as a dual-nationality household.  It’s been an entertaining ride, to be sure.  Allow me to explain.

Swear words and epithets: “Bloody” is an oft-used adjective in our house.  When the husband demonstrates the irritating “90% rule” (bringing his dirty dishes to the counter right above the dishwasher, setting them down, but not actually opening the thing up and putting the dishes in) I might say, “Put the bloody dishes in the bloody dishwasher!” or something to that effect.  “Bollocks!” is a fun little expletive that basically means testicles.  You can use it when you notice a parking ticket on your windshield after leaving the restaurant on your wedding anniversary (this has happened), or when you suddenly have an urgent need to use the bathroom just as they are announcing the final boarding call for your flight (this happens to the husband every single time we fly).  I’ve adopted the colorful, “Bugger off!” whenever the husband pesters me while I’m a) travel planning, or b) blogging.  And then there are the mild epithets we reserve for others – usually bad drivers or people on TV: “What a plonker/berk/knobhead/prat/numpty.”

New words and phrases: When asked how many languages I speak, I usually describe myself as weakly trilingual, having acquired (and lost) Spanish and French to varying degrees over the years. Upon reflection, however, I think I can claim British English as my fourth language.  Marrying an Englishman means I’ve had to learn countless words and phrases that don’t exist or have a different meaning in the States… things like:

Honestly, I could go on and on.  There are whole dictionaries dedicated to these linguistic differences.  What’s that famous quote?  “England and America are two great nations divided by a common language?”  Indeed.

Dumb questions: In our early dating life, I was pretty ignorant about England.  (Oh, who am I kidding?  I was ignorant about the world in general.  Probably still am, but hopefully less-so.)  The questions, “Are there a lot of African Americans in England?” and “When is England’s Independence Day?” brought about raucous laughter from my then boyfriend.  The first question was just a slip of the tongue, being conditioned as I was to calling black people African Americans, but he got a lot of teasing mileage out of it.  As for the second question though, I do think that England could quite easily declare 410 AD as the year of their independence (from Rome).  The specific month that the last Roman finally departed is probably hard to pin down, so they could just pick a month with no decent holidays (like August in America) and celebrate it then.  I mean, who doesn’t want another day off work?

Accent intensification: The great thing about the husband’s accent is that it’s intelligible.  That’s not the case with all British accents.  I mean, have you seen the movie Trainspotting?  I think I caught four words in that entire film.  (Yeah, I know, those are Scottish accents, but it’s the same basic idea.)  Less extreme, but still frequently incomprehensible, is the husband’s younger brother, who sounds like he’s speaking a foreign language.  I think he thinks I’m going deaf because my most frequent utterance while in his presence is, “What?”  While on the phone with his family, however, the husband’s accent suddenly intensifies, sometimes approaching levels of incomprehensibility I thought were only possible coming from my brother-in-law.  Interestingly, on our trip to England a few months ago, the husband was asked by a fellow Englishman, for the first time ever, if he was American!  Now, I know his accent has gotten milder over his decades in America, but he certainly does NOT sound American.  Bracing for the worst, I was astounded when the husband, a very proud Englishman (until recently, with the whole Brexit thing), let the innocent slight roll right off his back.  That’s growth, man.

Food cupboards: Thanks to online shopping and stores like World Market, the husband is never far from the beloved condiments and other edibles of his youth. 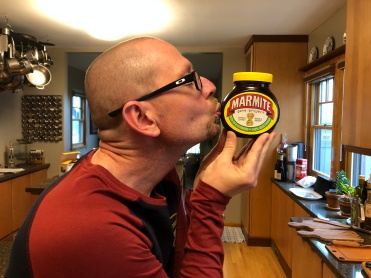 Dishes cupboard: Alcohol?  Espresso?  Tea?  It matters not what one drinks, but from what vessel one drinks.

Jam: I’ve never seen a group of people get so excited over something as quotidian as jam. English people have what I would consider an overdeveloped affection for this humble, commonplace spread.  Jam-filled this, jam-topped that… it gets them all aflutter.  I mean, if it were Belgian dark chocolate or something, then I could understand.  But seriously folks, it’s just jam.

Holiday & comfort foods: For an expat, food can be a very important way to stay connected with the homeland, especially on holidays when homesickness can sometimes show up like an uninvited guest.  At Christmas this may mean we have fruitcake, toad-in-the-hole and/or Quality Street™ chocolates.  When we watched the most recent royal wedding, we had Pimms™ cups.  We celebrate Shrove Tuesday, or what the husband calls “Pancake Day,” with crepes every year (see bulleted list, above).  Though he now drinks coffee in the morning, there’s still a place for tea in his life and like most Britons, he’s pretty dogmatic about it.  Words like Lipton™ and Celestial Seasonings™  are considered offensive expletives.  It’s Tetley™ or bust, and by the way, there’s a right way and a wrong way to brew tea and, according to the husband, you’re probably doing it wrong.  (I certainly have never made a cuppa that’s passed muster.)  And finally, when he’s feeling blue or out of sorts, the husband turns to the very British beans on toast.

Decor: We have an entire room decorated in homage to the motherland.  We call it the British Library, but also functions as a craft room and podcast studio. 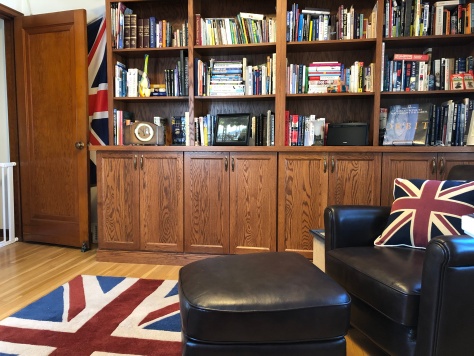 That’s a Magna Carta pillow in back.

Media subscriptions: First it was BBC America, then it was Amazon Prime so we could catch the Top Gear spin-off known as The Grand Tour.  And the newest charge on our monthly cable bill? Britbox.

TV, movies, games, and podcasts: Top Gear is a favorite. (The original Top Gear, mind you… not the sad excuse for a replacement hosted by Joey from Friends.)  Bond movies are required viewing on Christmas Day.  We will fight to the death anyone who claims the American version of The Office is as good as the British version.  On the other hand, the folksy British radio soap opera known as The Archers, as well a shockingly crude and vulgar British podcast (which shall remain nameless), are just two of examples of “entertainment” coming into our home over the airwaves that I struggle to tolerate in the name of cultural sensitivity.  Finally, the husband swears we own British Monopoly™, but all I can find is the European edition.  I’m not going to tell him, because he’ll probably have it rush delivered by next-day air, even though we almost never play Monopoly™.

Sports: Despite the fact that one of our first dates was meeting up to watch an outdoor rugby match (his idea), there was little indication that the husband was a sports lover.  This was good.  This was part of the plan.  I grew up in a home of rabid Green Bay Packer fans and had no intention of spending my life with a sports fanatic.  So it was that I was caught terrifically unawares when, nearly two decades later, a dormant seed of sports fandom began to sprout.  Arsenal is the team.  English soccer is the game.  The grating din of screaming fans emanates from our television every weekend for nine months a year, and the sport has even wormed its way into our weekly podcast in the form of the husband’s “Arsenal Update.”  (My deepest apologies to all our listeners.)

Travel: As I mentioned in Oh the Places I’ve Been: Breadth vs. Depth, we’ve visited England a lot, though “a lot” is a relative term.  Returning to the same country seven times might seem like a lot, but given that those visits have been spread over the course of 20+ years, it’s actually not that frequent.  Many expats return to the motherland annually.  The problem we face is that there are just so many other great places to explore in this world.  Given finite time and resources, we have often opted to see someplace new or different.  We’ll keep returning, however.  Great Britain is home to plenty of things we want to see and experience.  Plus, I need continued practice in trying to decipher the heavily accented utterances of my brother-in-law.

To conclude, as we find ourselves in the vicinity of our 20th wedding anniversary, I dedicate this post to you, dear husband.  You’re the one I can count on when there’s a dead mouse on the basement floor that needs disposing of, or when the computer is acting up, or when the gutters need cleaning, or for a last-minute donut run.  You’re my go-to guy for lawn care, ski-waxing, foot rubs, and so much more.  Thanks for being my tech commander, blog bully, bicycle mechanic, podcast co-host, and travel partner.  And thank you for making me English by marriage.  I’m bloody-well chuffed to be your wife.

Related post: Keeping Up a Holiday Tradition in the Time of Coronavirus