We awoke on our first morning in Nong Khiaw – Boxing Day – eager to embark on our first hike of the trip.  To get to the starting point for this endeavor, we needed to travel by water.  This meant cruising 40 minutes along the Nam Ou River by longtail boat and it was here that we experienced our one and only (and very minor) logistical hiccup of the entire trip.  We made our way down to the shoreline to find that our boat had left without us.  The next thing we knew, our guide was on the phone and what couldn’t have been more than three minutes later a longtail boat arrived.  (It’s amazing how seamless this trip was.  I’m quite sure there was a near constant buzz of activity going on behind the scenes and below our awareness to make it appear so.  Color me impressed.)

Don’t let the husband’s smile fool you.  Deep down he’s wondering how long before he can get back on a bike. 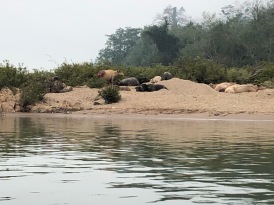 Finally we disembarked and began our trek.  Very shortly we came upon a Lowland Lao village.  One woman in this family was boiling rice to make Lao whiskey, a worthy endeavor if ever there was one. 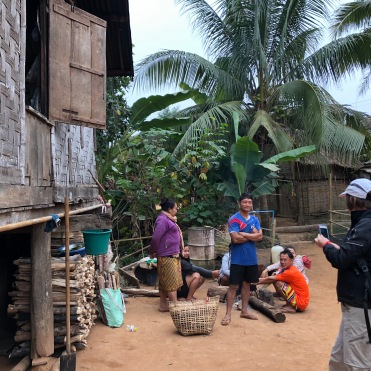 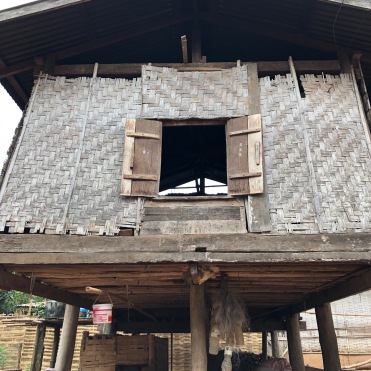 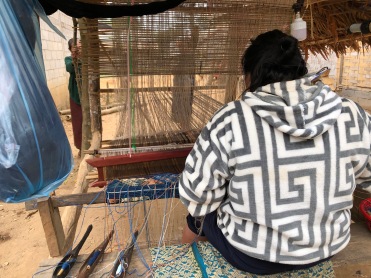 As much as we enjoyed the cultural encounters, I’ll be the first to admit that the hiking on this trip wasn’t quite what I was expecting.  I didn’t think it would be as intense as say, hiking a 14er, but this was more of a walk up some hills on a wide road in hot weather.  I wouldn’t have minded so much but I ate an obscene number of crepes at breakfast that morning… 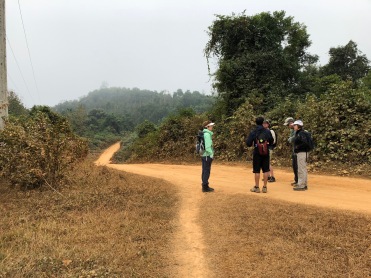 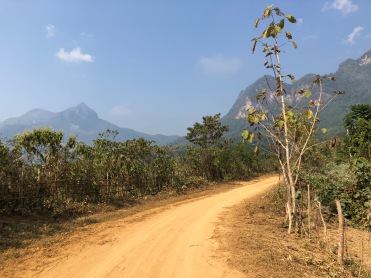 Anyway, in addition to admiring the scenery, we found other ways to keep ourselves entertained.

I was particularly taken with the water buffalo dung.  It was so exquisitely layered.  It instantly brought to mind fancy European pastries, specifically Italian sfogliatelle… 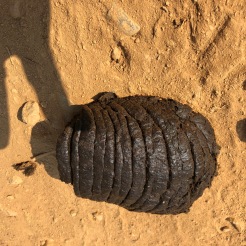 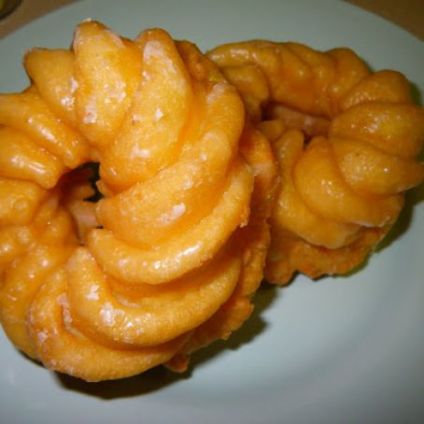 And yes, everyone on the hike – not least the husband – thought I was deranged for photographing what were essentially cowpies.  But am I right or am I right about the similarities?!  Interestingly, a hyperfocus on excrement would resurface later that night, but I’m getting ahead of myself. 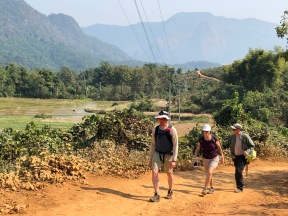 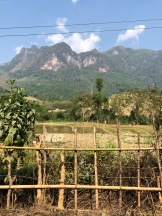 We hiked on and eventually came to a village of ethnic Hmong whose New Year celebrations were in full swing.  According to our guide, these celebrations go on for close to a month.   Because I have taught so many Hmong students over the last decade and a half, this experience was especially meaningful to me. 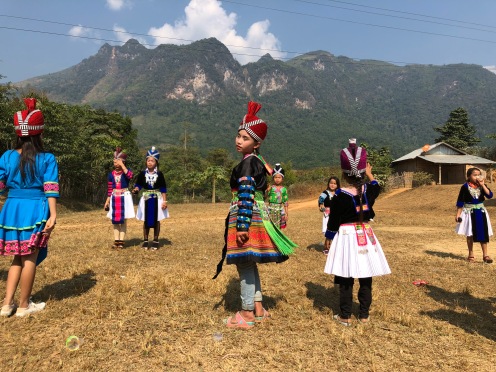 Dressed in traditional clothing, many kids were in the midst of the ball-toss game.  If a boy likes a girl, he asks her to toss the ball.  I think the boys must have been shy because there were a lot more girls than boys participating in the activity.  There were also a lot fewer boys dressed in traditional costume.  So it looks like the world over, boys are pretty much the same: difficult. 😉 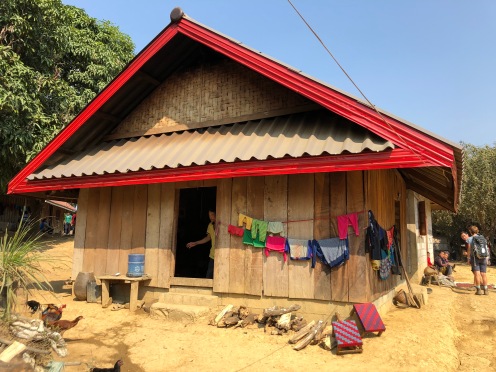 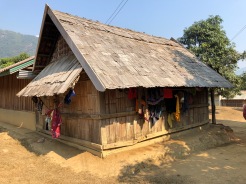 It was here that we learned of a disturbing tradition that sometimes befalls Hmong girls: bride kidnapping.  If a girl rejects an interested boy, he may return later with reinforcements, so to speak, and take her away to his home village where he marries her against her will.  This practice is now outlawed in Laos, but according to our guide it still occurs, though to what extent I cannot say.

We continued through the adjoining Khmu village, which was largely deserted, we were told, because they were all down the dusty road enjoying the Hmong festivities with their neighbors in a wonderful display of intertribal harmony. 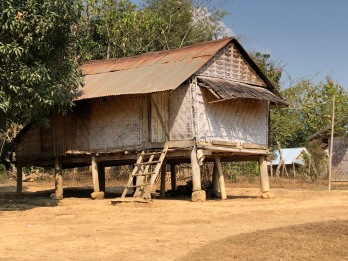 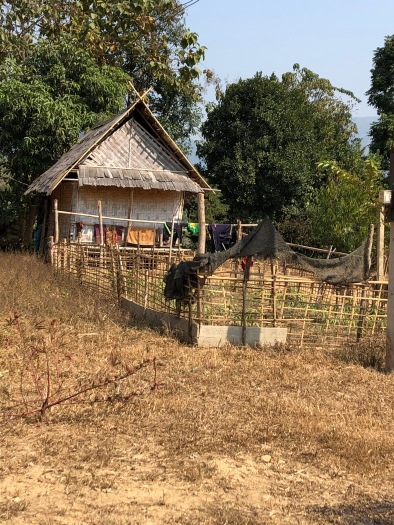 From here we began the trek back to the river where, happily, our longtail boat was right where it was supposed to be. 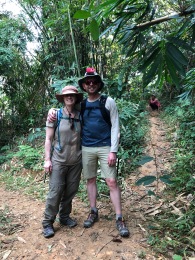 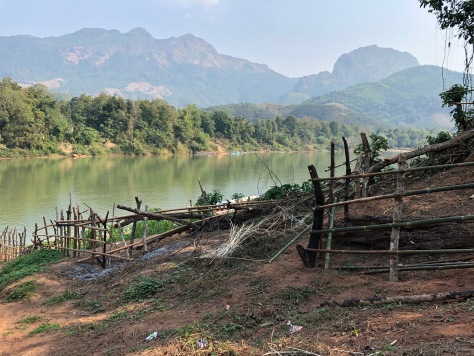 If the scenery had been pretty on the morning boat ride, on the way back to Nong Khiaw it was truly spectacular, in a way this average photo-taker (photographer is too ambitious a term) could never truly capture.

As soon as we got back to Nong Khiaw we were off again, this time to visit a cave that housed 800 Communist Pathet Lao in troglodytic austerity in the 1960s & ’70s.  The approach was via a long snaking bamboo bridge raised above the ground followed by some very steep – almost vertical -stairs.

How do you say “below code” in Lao?

It was difficult to get good photos of the inky interior, but suffice it to say that we couldn’t imagine how 800 people could tolerate daily existence in this not-overly-big subterrane for years on end.  Then again, when the alternative is taking your chances with the bombs raining down all around you in what would eventually become the most bombed country on earth, being cheek to jowl with your like-minded Communist brethren probably doesn’t seem so objectionable, inevitable hygiene issues notwithstanding.  Also, the mouth of the cave is well hidden by foliage, which prevented its inhabitants from being discovered by the enemy (the USA in concert with the Royal Lao government). 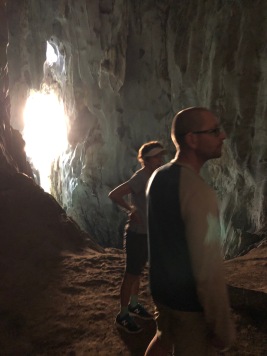 Finished with the day’s activities, we were dropped back in town for a rare evening on our own, meaning that dinner was not provided by R.E.I. and we were free to obtain sustenance however we liked.  Some people opted to dine at our resort’s restaurant, which had proven itself a good choice the previous night, but I had heard that there was a sizable Indian community in Nong Khiaw, and I never pass up an opportunity to eat Indian food.  After some cursory research online, which consisted of one quick stop on Trip Advisor where I saw mostly four-and-five-star ratings for Deen’s Indian Restaurant, I began lobbying for that.  The husband, though, had his own ideas.  He’d seen a restaurant he thought looked promising, but when we went to investigate, we learned it wouldn’t open for another 90 minutes.  Sensing the time was right, I pushed harder for the well-reviewed Deen’s and the husband acquiesced.

We sat down on the plastic furniture in their porch-like dining area and waited.  Eventually, someone came by and handed us some tattered menus.  After a quick perusal, the husband looked across the table at me and said, “You know, we’re taking a real risk eating here.”

Me: What are you talking about?

Him (looking around skeptically): This place.  We’re taking a risk eating here.

Me (waving dismissively): It got good reviews on Trip Advisor.  We’ll be fiiiine.

As you surely guessed from the title of this post, these are words I would come to regret.

After a while our appetizers came out: a huge samosa and some sort of bhajia, both of which we shared.  While not bad, per se, they were in effect tasteless.  If there’s one cuisine that is normally the opposite of tasteless, it’s Indian, or at least the Anglicized Indian we’ve come to know and love.

Then arrived our main courses and shared naan bread.  The husband had ordered some kind of meat and vegetable vindaloo.  I, some variety of curry with paneer.  For the unfamiliar, paneer is a type of white cheese that stays solid at hot temperatures.  It’s not as hard (or salty) as feta.  Perhaps queso fresco is a better comparison.  Anyway, I took one bite from my spoon, heavy with chunks of paneer and, well, let’s just say that the only thing that kept me from spitting it right back out again was four-plus decades of decorum bashed into my cranium by polite midwestern society.

Stupidly, I offered the husband a bite.

Paneer is supposed to be kept refrigerated or frozen.  This paneer felt like it had been pulled out from the back of a dusty cupboard, forgotten since the second Indochina War.  It was hollow.  Paneer is not supposed to be hollow.  The edges were dessicated, like a brick of cheddar that has been poorly wrapped before being tossed in the back of the fridge.  The consistency was somewhere between a rubber eraser and salt water taffy that had been left on the counter overnight.  Disgusted, I tore off pieces of decidedly inferior naan and dipped them into my bland curry sauce, avoiding all the remaining paneer, which was huddled up at the side of my bowl in a scrum of rejection and disappointment.  I tried the rice – rice is pretty hard to screw up, right? – but it was like licking a block of salt.

Astonishingly, the husband liked his vindaloo and ate the whole thing.

Of course, I should have sent it back.  I should have complained.  I should have refused to pay.  But I was in a part of the world I’d never been to and didn’t want to offend – didn’t know if I’d be violating some sort of “save face” culture.  When the bill came to a grand total of $12, I found I was somewhat mollified.

We walked back to our riverside resort, had a nightcap in the restaurant with a Swiss-German couple the husband had met earlier, and went to bed.

Me (waking from sleep): I don’t feel so good.

This, folks, was the beginning of the gastrointestinal drama.  It wasn’t just diarrhea.  I felt awful.  I began to shake, sweat suddenly pouring off me.  My heartbeat went into overdrive and my face went ashen.  Minutes later the husband joined me in my distress.  Frantic searching for pills ensued.  After a couple of distressing hours of bed-to-bathroom sprints, I found that my inventive Immodium-Pepto Bismol cocktail was potent enough to curtail the worst of the uh, outward symptoms, though it did nothing to improve how I felt physically.  I remember mumbling, “Please don’t let me vomit.  Please don’t let me vomit.”

Day 5 was not a good day to be sick.  Unlike the day before, when one of our tour group members vomited three times and wisely chose to spend the day in bed while the rest of us hiked, this was a traveling day, meaning we were checking out of our resort, driving three hours, and then kayaking four hours back to Luang Prabang.  There would be no staying in bed for us.  Our only choices were to do the best we could with the planned activities or spend the day laying awkwardly across the seats of the minibus.  So what did we choose?