Back in the Midwest, my cat antipathy was as strong as ever.  Somewhere along the way, my brother—also not a “cat person”—had acquired a feline companion.  Never in his wildest nightmares (or our mother’s) did he think he’d end up with such a pet, but being the only male in his family of five, he was outnumbered and thus, outvoted.  The cat, Mittens, who reportedly showered his immediate family—even my brother—with love and affection, hissed at everyone who wasn’t a member of the inner sanctum.  I tried reasoning with him, explaining (from across the room) that I was family.  “I’m effectively your ‘aunt,'” I told him, but my overtures of friendship fell on deaf, pointy ears.  The hissing continued and our relationship failed to blossom.

Some time later, I learned that hissing isn’t the only way a cat can express malevolence toward a human.  One summer day I was chatting with a neighbor at her front door.  I was on the stoop and she was just inside, holding the door open and standing in the threshold.  Along came her cat.  When it tried to sneak out the entrance, she positioned her foot between it and the outside world to stop it going on the lam.  This was not an aggressive move, mind you, but merely a placing of the foot in a strategic blocking maneuver much like you would see from a linebacker in a football game.  (I know absolutely nothing about football maneuvers and even less about linebackers, so take that analogy with a tablespoon of salt.)  Anyway, highly displeased, the cat retaliated.  With his teeth.  In her ankle.

Yep, I thought, nodding knowingly, cats really are the spawn of Satan.

But then two things happened.  Fluffy happened, and then the Ragdolls happened.

Fluffy was our next-door-neighbors’ indoor-outdoor cat.  Often, when we sat out on our patio, Fluffy would come by looking for attention.  I don’t know what made me finally reach out and stroke his fur—maybe my heart warmed (or grew a wee bit envious) at seeing Fluffy and the husband bonding?  Whatever it was, I began to like Fluffy.  He was gentle and sweet and didn’t hiss at me or bite my ankles.  Soon, my philosophy changed.  Instead of “I don’t like cats,” it became “I judge each cat on its own merits.”

The pair of Ragdolls lived with our friends a block over.  I may not remember their names, but I’ll never forget how docile they were.  Never were two cats more patient and accommodating—I could pick them up, hold them, cuddle them at will.  Not in their nature to resist, they just lay there, warm, furry lumps in my lap.  Not an entirely unpleasant experience, I conceded.

Then along came petsitting, perfectly poised to exploit the cracks in any anti-cat sentiments still clinging on below my awareness.  My first sit was for a dog and cat in Seattle.  Lucy the cat was very friendly, but preferred the windowsill to my lap most of the time (except in the wee hours when she wanted to sleep on my head).  Then there was the catsit in Colorado.  That, I think, is where I finally set a match to my No Cats membership card.  Cosmo had a great personality—the perfect mix of sweetness and sass.  Watching him with the husband made my heart swell. Seeing them bond so effortlessly did make me a tad jealous, but it also made it all the sweeter when Cosmo sought me out for attention and affection.  My catitude had changed for good.

Last but far from least, there’s Bob.  A few summers ago, I was working in the garden when a cat showed up in our yard and gave me a throaty meow.  Unable to speak Cat, I let him into our three-season porch and distracted him with some cream while I hit up some cat-parent neighbors for food and litter.  He settled into a cushy chair and wouldn’t budge, except to alight from his throne for food and rubs.  I called the phone numbers on his tag and left a message, but didn’t hear back.  Long story short: eventually, he did leave, but what we didn’t know at that time was that the cat—whose name we later learned is Bob—decided to adopt us.  He spends many days on our porch each spring and summer.  We’re in touch with his humans, so they know where to find him, but what we’ve learned is that Bob is an independent spirit who will willfully urinate in his house if he’s not let out to explore and have “adventures.”  Hanging out at our place appears to be high on his list of thrills.  Bob is a bit of a Catsanova.  He makes us feel like we are the only humans he could ever love, but we’re pretty sure he has doss houses up and down the block.  We don’t mind.  Bob can cheat on us—we love that cat!  He can do no wrong (except maul our bunny, which I’m pretty sure he would do if given half a chance). 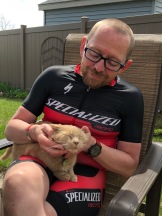 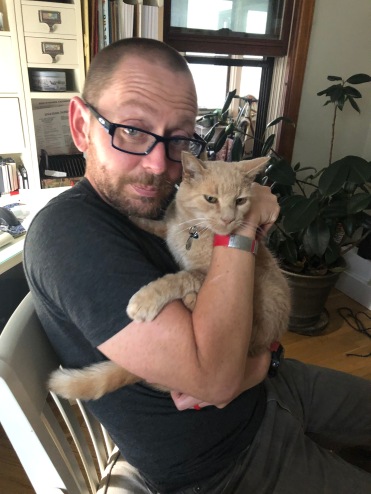 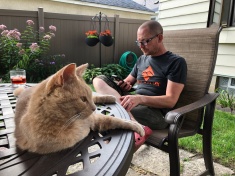 There are still some things I don’t like about cats—things even life-long cat-lovers might agree are annoying: butts in faces, litter box smells, climbing all over you when you’re trying to work.  Also, I’m still not a big fan of kittens.  They’re cute from a distance, but they’re not always in full control of their teeth and claws, and of course, I have flashbacks of being used as a scratching pole for a half dozen kittens back in Montana.  Still, I feel like a cat is in our future.  Our bunny absolutely will not tolerate any other animals in the house, but I dream of having a multi-species household.  Maybe someday . . .

And this, dear readers, concludes my journey—nay, metamorphosis—from cat hater to cat lover, or at the very least, cat very very very liker.

I would like to close with a poem written by cat parent and resident android Lieutenant Commander Data of the star ship Enterprise and recited at a spoken word performance on Star Trek: The Next Generation, season 6, episode 5: “Schisms.”

Felis catus is your taxonomic nomenclature,
An endothermic quadruped, carnivorous by nature;
Your visual, olfactory, and auditory senses
Contribute to your hunting skills and natural defenses.

I find myself intrigued by your subvocal oscillations,
A singular development of cat communications
That obviates your basic hedonistic predilection
For a rhythmic stroking of your fur to demonstrate affection.

A tail is quite essential for your acrobatic talents;
You would not be so agile if you lacked its counterbalance.
And when not being utilized to aid in locomotion,
It often serves to illustrate the state of your emotion.

O Spot, the complex levels of behavior you display
Connote a fairly well-developed cognitive array.
And though you are not sentient, Spot, and do not comprehend,
I nonetheless consider you a true and valued friend.